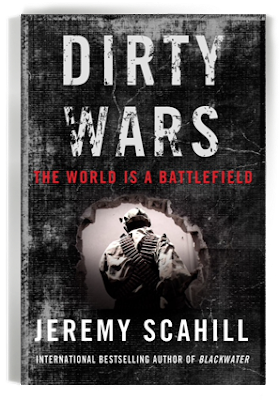 I thought I had a pretty comprehensive knowledge and understanding of the ignorant and shameful policies chosen by the leaders of the United States since 9/11. But though I've worked to keep up with ongoing revelations, and I'm certainly not uninformed, I now believe I was wrong. Jeremy Scahill's new book, Dirty Wars: The World Is a Battlefield, paints a panoramic picture of murder, arrogance, desperation and folly. For the moment, until additional sources spill further dimensions of perfidy and evil as they well might, this is the definitive account of our global "war on terror." Certainly see the movie, but if you can stand to care, you do need to read the book.

Unavoidably, lots of us have some awareness of what an ongoing horror show the US invasion of Iraq made of that unhappy country. That war was a bloody imperial lie from start to finish. And, painfully, we've gotten to the point that a majority of us think the Afghanistan adventure wasn't worth the blood and treasure (not to mention the dead Afghans.) But other escapades of empire, especially those in Pakistan, Yemen and Somalia, have gotten less notice. Scahill's been there.

I found the sections on Somalia informative; somehow I'd missed a lot of this. The CIA took the lead in our war in that nation and apparently replicated its practice from Afghanistan, buying up shady, vicious warlords to attack other factions it considered Islamist threats. In retrospect, it is hard to see any of them as "good guys." When many Somalis rallied around a faction that threw these warlords out, the US hired the Ethiopian state to invade. When Somalis rose up against the Ethiopian occupation, the US picked up a new set of warlords and the small al Shabab Somali set signed on with al Qaeda. Along the line, US special military forces (the Joint Special Operations Command [JSOC] -- the guys who finally offed bin Laden) took over the bulk of Somali operations, as they have also the better known US drone wars in Pakistan and Yemen.

President Obama seems to have become a great fan of using JSOC to do his dirty work. This military force seemed such a clean, safe alternative to George W.'s blunderbuss style of empire. He got his introduction to JSOC's value in 2009 when Somali pirates seized the merchant ship Alabama and carried its captain off in a small boat.

The commander asked, 'Do I have your permission to execute?' And the President says "Yes you do." The commander gives his order.

Captain Richard Phillips was rescued and returned to the United States with much fanfare. President Obama won praise from across the political spectrum for his leadership in taking down the pirates and bringing an end to the hostage situation without losing a single US life and with just three bullets fired. Behind the scenes, it was a powerful lesson for President Obama about the clandestine force that President Bush had once praised as "awesome" -- JSOC.

JSOC had given a politically dangerous made-for-TV movie episode a politically advantageous outcome -- and Obama apparently realized a President possessed a ready-made weapon controlled by him as Commander in Chief to replace George W.'s "dumb wars."

Scahill goes on to tell the story of our drone wars in Pakistan and Yemen and of the administration's embrace of targeted assassination, including of US citizens. The account is detailed and depressing and, like Mark Mazzetti's book on the CIA role, leaves me wondering how real a threat truly exists if so much energy can have been wasted on bureaucratic chest bumping over who got which piece of the action.
***
For me, one of the most significant parts of Scahill's story is the reconstruction of what US forces, under the JSOC mantle, did at Camp NAMA near Baghdad during 2003-4. Though there have been numerous reports, there have been no consequences, no trials, no true accounting for this torture regime that didn't even serve any plausible military purpose.

The acronym NAMA stood for "Nasty-Ass Military Area," Its motto, as advertised in posters throughout the camp, was "No Blood, No Foul." A Defense Department official said it was a play on a task force adage: "If you don't make them bleed, they can't prosecute for it."

… The task force at NAMA was run by lSOC, but it was built by pulling personnel from a variety of agencies and units. There were CIA and DIA interrogators, air force interrogators, and a variety of analysts and guards. "They told us we can't tell our chain of command about who works here or what [the task force] does. You're completely shut off. You can only discuss it amongst yourselves. That's what they told us from the very first day," recalled an interrogator who worked at Camp NAMA in 2003-2004. … Many of the members of the task force would grow long beards and seemed eager to make themselves look as frightening or intimidating as possible. "This is the dark side of the forces. This is the realm where you have essentially a cadre of folks who have a great deal of freedom. 'The folks that get to this level are treated with a certain amount of deference," Lieutenant Colonel Anthony Shaffer told me.

… The harsh interrogation methods that were being refined in black sites and in Afghanistan were to be unleashed in Iraq. "There were two reasons why these interrogations were so persistent, and why extreme methods were used," said a former senior intelligence official. "The main one is that everyone was worried about some kind of follow-up attack [after 9/11] But for most of 2002 and into 2003, Cheney and Rumsfeld, especially, were also demanding proof of the links between al Qaida and Iraq that [former Iraqi exile leader Ahmed] Chalabi and others had told them were there." … Each morning, the crisis action team had to report that another location was a bust. Rumsfeld grew angrier and angrier. One official quoted him as saying, 'They must be there!' At one briefing, he picked up the briefing slides and tossed them back at the briefers," according to [journalist Rowan] Scarborough.

… The JSOC Task Force did not categorize Camp NAMA as a prison but rather as a "filtration site" where intelligence was being obtained. This gave cover for all the dirty activity and the secrecy that shrouded it. … The interrogations … often incorporated extremely loud music, strobe lights, beatings, environmental and temperature manipulation, sleep deprivation, twenty-hour interrogation sessions, water and stress positions, and personal, often sexual, humiliation. The forced nudity of prisoners was not uncommon. Almost any act was permissible against the detainees as long as it complied with the "No Blood, No Foul" motto. But, eventually, even blood was okay.

One former prisoner -- the son of one of Saddam's bodyguards -- said he was made to strip, was punched repeatedly in the spine until he fainted, was doused with cold water and forced to stand in front of the air-conditioner and kicked in the stomach until he vomited. Prisoners held at other facilities also described heinous acts committed against them by interrogators and guards, including sodomizing detainees with foreign objects, beating them, forcing water up their rectums and using extreme dietary manipulation-nothing but bread and water for more than two weeks in one case.

…The abuse and torture at Camp NAMA was not an anomaly, but rather a model. When the US government began probing how the shocking horrors meted out against prisoners at Abu Ghraib happened, how it all began, the investigation revealed that those running the prison had looked to the example set at Camp NAMA, Guantanamo and at Bagram in Afghanistan.

President Obama says "we don't torture." That's dubious; we certainly do still "render" prisoners to other countries to torture and hold others in uncharged military detention. There has been no accountability for the intellectual authors who ordered these crimes, even if we were to choose to let the actual perpetrators off the hook as dupes of authority. The stain lingers.
***
I should mention that Jeremy Scahill is practicing journalism these days along with Glenn Greenwald, Laura Poitras and others at The Intercept.
Posted by janinsanfran at 5:00 AM

Jeremy was on Maher Friday night. I was not happy that Maher kept saying he hoped they wouldn't kill Jeremy. I have to admit the fear is out there but don't like hearing it voiced. He is articulate and very knowledgeable. It seems he and Greenwald had launched something they call The Intercept which sounds like something to support. I haven't had time to go looking for what that would mean but we can't count on routine journalism. Unfortunately they each seem to have one thing they do work on and ignore the rest (like global warming). Getting the info as an informed citizen is a constant challenge.