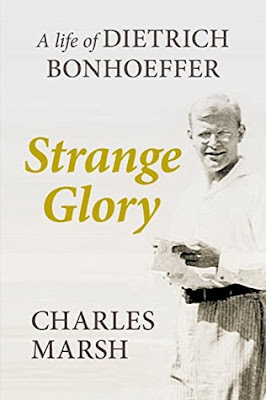 I cannot help but look at Dietrich Bonhoeffer's life with admiration. Who knows what choices any of us would have made in his circumstances? Within the limits of his class and culture, this German theologian chose to resist Hitler, collaborating with a coup attempt, in order to follow his evolving apprehension of God present in the human world; he paid with his life.

But what an unappealing character he seems to have been! Charles Marsh's Strange Glory is a thorough biography which hides none of the man's quirks which were many and largely unattractive, as was the German Evangelical Church (Lutheran), a state institution, in which he was formed.And yet, and yet, Bonhoeffer almost alone among German Christians of his class, moved beyond horror at Hitler's barbarism to action. Though a faithful pacifist, he became convinced that the evil before him required an active response, even if thereby he participated in its violence and took on his own guilty participation in violence. He turned to Luther's teaching:

One came to Christ as a sinner in the best case. One could at least sin for the sake of righteousness. Bonhoeffer did not try to resolve the paradox by assuming moral innocence but accepted the paradox by incurring the guilt born out of responsible action.

The choices available to Bonhoeffer are certainly something all of us can pray -- and work -- to be spared.
Posted by janinsanfran at 5:00 AM