Kamala Harris quits: she had no tough campaign experience behind her 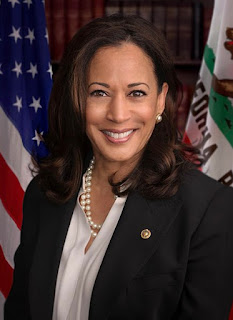 So Kamala Harris is out of the Democratic presidential sweepstakes. The pundit media are full of commentary on what went wrong for her. Nothing comes easy for a Black woman, a mixed race woman, any woman. So all that was against her. And, as most commentators point out, she never settled on a coherent reason -- a message -- why she should be President, besides fulfilling the promise her brains and obvious star-power.

Full disclosure: Harris was never my preferred candidate, but like so many who follow politics, I thought she might just run away with the nomination, serving as an acceptible compromise between our aspirations for change and our desire for conventional credibility. Didn't come to pass.

I have no desire to dance on Harris' grave. If she'd won the nomination, it would have been easier to work up enthusiasm for her than for some of the other potential presidents. We don't have to fall in love with any candidate; we just have to commit to engaged citizenship and democracy over squalor, graft, and deliberate cruelty. She'd have at least made necessary work interesting.

Before Harris gave up, the pundit media was full of stories about trouble in her campaign; the Times wrote one that claimed 50 (!) informants among staff and supporters. A presidential campaign is a big enterprise, but that's a hell of a lot of disgruntled inside voices. And their willingness to talk to the media shows what I think was a big part of doing Harris in: she brought no almost experience of running a big, fiercely contested campaign in which she was not the establishment candidate.

This is not so obvious outside California. After all, Harris had won in a state of 40 million people. That's a lot bigger than the electoral accomplishments of some of the other contenders. But in fact, Harris has followed a charmed political path. That's not to say she didn't work for what she won -- it's to say her path didn't much involve attracting and mobilizing broad swathes of the people as she would have needed to do to win the White House.

Kamala Harris won her first election, as District Attorney, in San Francisco in 1996. She knocked off the incumbent, Terence Hallinan, a leftish long-time fixture of city politics whose career of fisticuffs and muck-stirring had worn out his welcome. He was colorful and on the side of the angels for a prosecutor, but inspired little confidence that he was getting law enforcement done. Harris was backed by the powers-that-be including Senator Diane Feinstein, Willie Brown, then jumping from state Assembly Speaker to Mayor, and the police union. Vaguely liberal, she was a good fit for a weary city.

In 2010, after a mixed record little noted by the general public as San Francisco D.A., Harris ran her only really tough electoral race, running statewide, and defeating Steve Cooley to become California Attorney General. This was the first time she'd face a well-funded, moderate Republican; we don't have those in San Francisco. Out of over 9 million votes cast, she squeaked by with 46.1 percent and a 74,157 vote margin. In the same year, Democrat Jerry Brown running for Governor destroyed Meg Whitman by a 53.8-40.9 margin, and over a million votes. Harris' contest was one of those oh-so-Californian elections: counting of mail-in ballots continued for days and the election day result was overturned in favor of the Democrat. (We have to get our people voting more promptly!) This one was a tough campaign, but Harris ultimately rode the statewide Democratic wave into office.

By 2016, California's capitol had two rising Democratic stars, Lt. Gov. Gavin and A.G. Kamala, and faced a potential clash of titans. Jerry Brown would be termed out as governor in 2018. Who would get the nod for the big prize? Senator Barbara Boxer simplified things by choosing not to run for re-election after three terms. To all appearances a deal was cut: Kamala got the Senate spot, while Gavin would run for Governor (and win) in 2018. The 2016 Senate election was almost a laugher. Harris defeated her conservative Democratic opponent (who was vying for Republican votes) with over 62 percent. And thus Harris was launched on the national stage, without ever having shown she could manage and win a tough campaign on her own.

She had proved that she knew how to line up parts of the establishment behind her star power. She always had that in California and her presidential run had some of the same: when she quit, she was second only to Joe Biden in endorsements from political figures, including older members of the Black Caucus.

This accomplished, ambitious politician certainly isn't done just because her presidential ambitions have been checked. We don't entirely know who she is yet. I hope she evolves into an accomplished Senator and finds more grounding in principled work on behalf of her constituents. Such potential there ... not yet realized.
Posted by janinsanfran at 6:04 AM