We live in interesting times 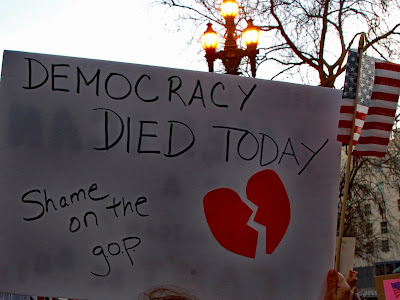 Fintan O'Toole is an Irishman. I suspect that heritage provides him an advantageous perch from which to observe the follies of the two English-speaking polities his country has been fated to sit between, the early divorcing colonies on the American continent and the Less-Than-United Kingdom of Britain. He observes our situation on this side of the water perceptively and reaches drastic conclusions.

... the afterlives of slavery, of the deranged presidency, and of the threat of terrorism as permission to set aside legal and democratic rights — [these all] have raised the stakes in the present struggle. This mass of unresolved stuff is being forced toward some kind of resolution.

That resolution can come in only one of two ways. What has come to the surface can be repressed again—but that repression will have to be enforced by methods that will also dismantle democracy. Trump’s boast that he can do whatever he wants will have to be institutionalized, made fully operational, and imposed by state violence.

Or there will be a transformative wave of change. All of this unfinished business has made the United States semidemocratic, a half-and-half world in which ideals of equality, political accountability, and the rule of law exist alongside practices that make a daily mockery of those ideals.

This half-life is ending—either the outward show of democracy is finished and authoritarianism triumphs, or the long-denied substance becomes real. The unconsumed past will either be faced and dealt with, or it will consume the American republic.

U.S. democracy sits on a cliff edge; we could go either way. We will make choices. O'Toole's essay is elegant, concise, and absolutely worth reading all of.
...

Since early in the pandemic, I've been sitting on writing something about O'Toole's dissection of the English Brexit process: The Politics of Pain: Postwar England and the Rise of Nationalism. It's a biting, sometimes hilarious, thoroughgoing take-down of the post-imperial stupidity of England's ruling class, mostly Tories. Somehow it didn't seem right to delight in this as Britain was flunking its COVID test apparently as badly as most of the U.S. was flunking our own. I probably won't ever get to it. But it lives as period piece of the time before the pandemic when Brexiteers thought they were riding high while in reality making their island nation smaller and meaner. Worth a quick read if trying to understand other country's delusions of grandeur. Goodness knows, we've enough of those of our own to keep us busy.

The broken-hearted sign lamenting democracy was part of a little demonstration following the Republican acquittal in Trump's impeachment trial. The book cover is from the English edition -- more interesting than the U.S. cover.

Posted by janinsanfran at 12:37 PM