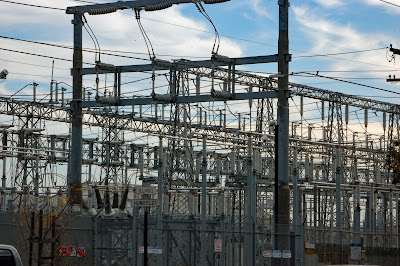 As I wait for the electrician, here's a quick take on the frustration I feel when thinking about nuclear power.

The mantra of the best folks working to reduce carbon emissions by ending our dependence on fossil fuels these days is "Electrify Everything!" Insofar as I can understand, this seems believable as a strategy to mitigate the climate change we're living.

But, for many of these climate hawks, Electrify Everything! includes not only extending the life of existing nuclear plants, but also building new ones, perhaps smaller and more numerous.

And I'm open to the idea that our engineers may have learned a lot from 75 years of managing nuclear energy and 50 years of building and running power plants. Experience does lead to improvements.

This brings me to the random article I ran across this morning in the Washington Post:

Ten years ago, three power reactors on the Japanese coast melted down when hit by a tsunami. Heroic workers managed to contain much of the nuclear material released but

more than 1,000 huge metal tanks loom in silent testament to one of the worst nuclear disasters in history...

The tanks contain nearly 1.25 million tons of cooling water from the 2011 disaster and groundwater seepage over the years — equivalent to around 500 Olympic-size swimming pools — most of it still dangerously radioactive.

The power company that owns the disaster site says this contaminated water can be treated and released into the ocean. Or at least most of the hazardous nuclear isotopes can be removed. If they do it right and patiently. Not surprisingly, given the damage that their industry has already suffered as a consequence of the accident, people who work in fishing off Japan and South Korea are doubtful.

And scientists not tied to the power companies maintain that a pledge to eliminate all the extremely radioactive corium from the waste is a lie, given that "the technology to do so doesn’t yet exist."

There are tremendous incentives to trust that we can push the question into some future of how to truly remove the radioactive waste we generate while replacing fossil fuels with nuclear. But the track record is not reassuring.

Let's hope smart engineers and governments can do better on this without poisoning people who become sacrifices to progress.

Posted by janinsanfran at 1:03 PM

Future is worrisome to me. I didn't think I'd ever leave to see the Congress we have and some of the scientists I wonder about as well.