Warning: this story is stomach turning.

Former Navy SEAL Eddie Gallagher is Donald Trump's kind of guy. He was tried in a military court for stabbing a severely injured ISIS prisoner in the neck and got off on that particular charge. But he was convicted, among other misdeeds, of posing with the corpse. [See below] The former president was easily convinced this was just the sort of behavior he wanted in the nation's fighting forces. He supported Gallagher and eventually gave him a broad pardon.

The Navy didn't want its guys running around without discipline, so it tried various measures within its jurisdiction to mark that Gallagher had crossed a line. Trump didn't like that either. The affair bounced around the chain of command, eventually leading to Trump's own chosen Navy Secretary getting booted.

At Task and Purpose, Jeff Schogol reports on Gallagher's current boasts, now that he's off the legal hook.

... Gallagher has told “The Line” [a podcast] that the SEALs were not tending to the fighter’s injuries; rather, they decided to conduct “medical treatment on him until he’s gone.”

“I mean, he was going to die, regardless,” Gallagher said. “We weren’t taking any prisoners."

He also claimed that every member of his platoon, including one SEAL who later reportedly described Gallagher as “evil” to investigators, all agreed to torture the ISIS fighter to death.

“Everybody knew what was going on,” Gallagher said. “It’s the only truthful thing to this whole process; and then the rest of it just is like a bunch of contorted lies to, like, pin that whole scenario on me.”

We can only hope that Gallagher is boasting about torturing the prisoner to amp up his right-wing notoriety. He's found a sweet grift, being the right's favorite war criminal. Though the whole platoon is pictured here, we know some of them turned Gallagher in and called him "freaking evil." 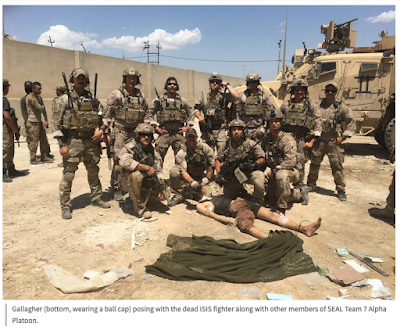 These stories from the forever wars keep sending me back to the story of the U.S. troops who liberated the Nazi concentration camp at Dachau. Seeing the terrible stacks of prisoner bodies everywhere, their first impulse was simply to shoot every German in sight. But officers made them stop, insisted the German commanders get a trial with explicit evidence and defense lawyers -- and then quickly hanged the men convicted. This proceeding set the model for the better known Nuremberg trials.

Warriors aren't angels but they need not be allowed to become devils either.

Posted by janinsanfran at 10:15 AM