That was the week that was ...

Anyone else remember the satirical TV show? 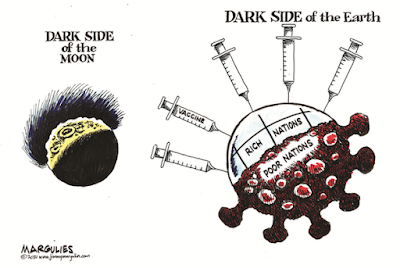 Despite the surprise from the C.D.C., revoking the mask advice in the U.S., in most settings, for most vaccinated people, many of us found the past week disturbing.

With Biden in the White House, many people have relished the chance to unplug from Donald Trump—and politics altogether—in recent months, secure in the knowledge that the new President will not tweet us into nuclear war. (“Fire and fury”!) Our late nights and early mornings and weekends are no longer shadowed by the ever-present uncertainty that was the Trump-era news cycle.

For those of us who are still paying attention, however, there is a new worry, and it has to do with what Kevin McCarthy and House Republicans did this week. Trump, defeated and disgraced by the events of January 6th, might have disappeared as previous Presidents who lost reëlection did. But his Party’s continued embrace means that Trump will not fade slowly into the Mar-a-Lago sunset. “He’s going to unravel the democracy to come back into power,” Cheney told the “Today” show on Thursday. It is not over, not at all.

Or flat out terrifying, per Charles Blow:

Panic fatigue is real. I get it.

Anger is exhausting. I get it.

But what are your options? Acquiescence? Passivity? Ignoring the blare of the alarms because you have tired of the tension?

The question is whether we’re too tired from the Trump years to see what is happening and mount an actual defense.

We all need to recognize that [democracy] is a marathon not a sprint and therefore checking in and out and/or saving up some energy for next year is totally appropriate and necessary ...

Posted by janinsanfran at 9:34 AM

Hear! Hear! GOP now seems to stand for the Grand Ol’ Prevaricators. I certainly hope we’re able to keep our democratic republic given the efforts of those attempting to destroy our system of government. People in government like McCarthy are violating their oath of office. I hope their constituents hold them accountable in the ballot box when next they are up for re-election.