How stupidly ghoulish can Republican politicians get? 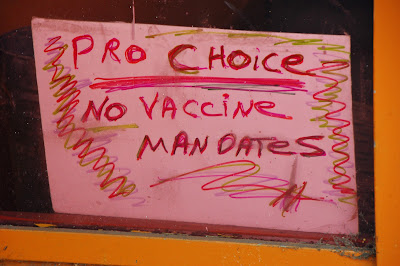 These days, the signal characteristic of the unvaxxed is that that they are Republicans. Racial gaps in vaccination rates have been closing. But GOP leaders thrive on keeping their supporters riled up against public heath measures in the name of "freedom." Being unvaxxed has become a MAGA cult marker.

This is literally killing significant numbers of people in the GOP base. Former New York Times reporter Donald G. McNeil Jr. offers a quantitative estimate of how many votes the vaccine war is costing the party:

Virtually all are adults. If 95 percent were unvaccinated and we assume that 75 percent of those were Trump supporters, that’s 1,300 to 1,900 of his voters being subtracted from the rolls every single day.

Right now, about 60 Arizonans, 36 Georgians, 34 Wisconsinites and 14 Nevadans are dying of Covid each day. Seventy five percent of 95 percent of that would be minus 103 Trump voters per day — just in those four swing states. Week after week. That adds up.

Also, there is another factor in the equation. Covid is just one cause of overall mortality.

While Republican state legislatures are working hard to suppress the Democratic vote, an invisible opposing hand is working against them: God’s.

The top five causes of death in this country, in order, are: heart disease, cancer, Covid, accidents and stroke. They all tend to smite the old, the obese and those who live far away from hospitals, i.e., rural red America.

McNeil attributes Donald Trump's recent half-hearted support for vaccines -- but not mandates -- to  some awareness of these numbers. If we are still too have elections, he needs these voters.

H/t toJVL at The Bulwark for pointing to McNeil.

I looked at that sign and read the last word as two man dates. Forgive me I started to laugh.

Bonnie: wonderful reading of a less than clear sign. Hah, hah! Seen on a window near where I live.