2022 Elections: Senate contests Democrats should and must win 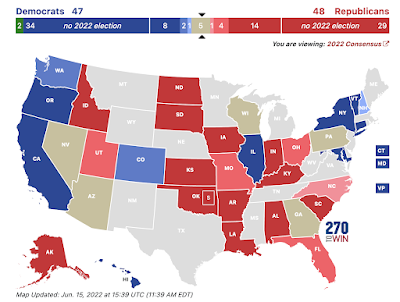 In many states, Republican gerrymanders make it hard for Democrats to win a fair share in state legislatures. For example, Democrats, including Governor Tony Evers in 2018 and Joe Biden in 2020, won the majority of all Wisconsin votes. But the state legislature is completely controlled by Republicans. Their dominance is bolstered by geographical sorting, rural and urban, as well as gerrymandering. In some states where this pattern prevails, Democrats can be quite competitive statewide and so have opportunities to win or hold onto U.S. Senate races.

Here's a run down of the most competitive states.

• Georgia: Incumbent Democratic Senator Raphael Warnock, elected to a short term in 2020, will be running against Trump-cult adherent and Georgia football hero Herschel Walker. Since Walker is pretty close to certifiably nuts, violent, the acknowledged father of four children by four different women whose paternity he at first concealed, and a serial fabricator, this shouldn't be much of a contest. But that assumption disregards the heft of college football in the Peach State. Warnock has been a strong voice for voting rights and for the people of Georgia.

• Pennsylvania: This open Senate seat attracted a wild cast of characters in both party's primaries. TV-doctor Mehmet Oz won the Trump endorsement and squeaked through for the GOPers. Apparently he actually lives in a mansion in New Jersey which may not go down well with Pennsylvania voters. John Fetterman, the Democratic Lieutenant Governor, is a 6'7", tattooed, shorts wearing, giant straight shooter, a bit of a breath of fresh air in the staid political class. Let's hope he can overcome some health challenges.

• Wisconsin: Republican Ron Johnson, the Senate's dumbest anti-vaxxer and an apparent Trump co-conspirator who tried to prevent the 2020 transfer of power to Joe Biden, is up for re-election. If Dems were not so well organized, as the sitting Senator, he'd probably be a shoo-in; the primary for the Dems is late, August 9 and the winner may have a shot in a state usually quite evenly divided.

• Arizona: Incumbent Democrat Mark Kelly will face off against one of several Republicans to be chosen on August 2. The leader among them, a man who needs another vowel, sitting Attorney General Mark Brnovich, figured out his own advancement meant he had to support Donald Trump's Big Lie against his own Republican election officials in this battleground state. Trump has endorsed Blake Masters, a hard right libertarian and tech-bro Peter Thiel protege, who wants to privatize Social Security.

• Nevada: Incumbent Democrat Catherine Cortez-Masto is running for a second term. Her opponent is Adam Laxalt -- whose own family considers him an unworthy usurper of a proud Nevada name -- a far right wingnut and failed governor candidate. Not going to be easy for Cortez-Masto though; the Democratic registration advantage in the state is declining.

• North Carolina: This open seat is an attractive long shot prize for Democrats as their nominee for the state's other Senate seat only lost by 1.8 percent in 2020 while Trump won the state. The sitting governor is a reasonably popular Democrat, so Dems see a chance. Democrat Cherri Beasley, a former judge of the state Supreme Court, is running against Republican Ted Budd, a Congressman who doubles as a gun range owner. Early polls give Beasley a chance to pull this one out.

• I'll be watching also New Hampshire, Ohio and Missouri where the vagaries of electoral contests might shake up Senate prospects -- though probably not, as party polarization is such a strong force.

Posted by janinsanfran at 11:35 AM