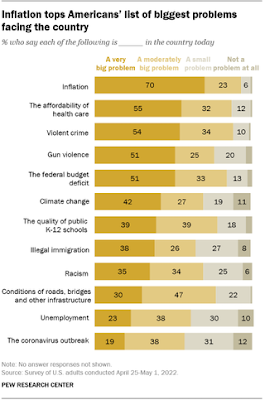 We're not a happy country these days. We have a multitude of worries as this recent poll from the Pew organization catalogues.

Inflation tops the list, but health care,  gun violence, and even climate have us agitated as well.

Catherine Rampell, an economics and data opinion writer at the Washington Post, makes some concrete suggestions for how people campaigning for Democrats might talk about our national anxieties. Here are her thoughts:

[Democrats] have a shot at [passing] a ... modest package focused on climate, prescription drugs, and maybe some tax increases on high-earners and corporations.

So what do Republicans stand for?

Their national leaders won’t say, even when asked directly; their state-level rising stars are mostly focused on fighting with Mickey Mouse and drag queens. But if you look at GOP actions taken over the past several years, including when they had unified control of the federal government, you get a sense of what Republicans are likely to prioritize.

Mostly, Republicans seem to care about tax cuts for the wealthy and corporations. They want to find ways to repeal Obamacare, or otherwise reduce access to health care by (for example) slashing Medicaid.

They care about installing judges who will roll back reproductive rights.

They care about supporting a president who used the powers of the state to further his own political and financial interests, rather than those of the American public he was sworn to serve.

They care about supporting a presidency whose few purported diplomatic achievements, in retrospect, look largely like an excuse to meet potential investors who might fund Trump aides’ new private equity endeavors.

They care about defending, at all costs, a president who cheered on the mob seeking to hang his own vice president.

And they care about undermining the integrity of our election system and overturning the will of the voters, if and when vote tallies don’t go their way.

There are some of us who prize inaction on most everything but conservative judges and tax cuts for rich people. But most of us need to try to make government work to improve our lives.

Posted by janinsanfran at 7:37 AM