In 2021, in the Journal of Democracy, Rachel Kleinfeld published a solid survey of the social science research into rising U.S. rightwing political violence. Much of it restates the obvious in academese -- Republicans are a highly homogenous white bunch whose grievances, mostly imaginary, are manipulable by power-seeking pols like Donald Trump and his tribe of imitators.

But I found several of her concrete descriptive observations worth highlighting.

Although incidents from the left are on the rise, political violence still comes overwhelmingly from the right, whether one looks at the Global Terrorism Database, FBI statistics, or other government or independent counts. Yet people committing far-right violence—particularly planned violence rather than spontaneous hate crimes—are older and more established than typical terrorists and violent criminals. They often hold jobs, are married, and have children. Those who attend church or belong to community groups are more likely to hold violent, conspiratorial beliefs. These are not isolated “lone wolves”; they are part of a broad community that echoes their ideas.

The MAGA crowd are emphatically not the dispossessed.

... the people most likely to support political violence were both Democrats and Republicans who espoused hostility toward women. A sense of racial threat may be priming more conservatives to express greater resentment in ways that normalize violence and create a more permissive atmosphere, while men in both parties who feel particularly aggrieved toward women may be most willing to act on those feelings.

So often, misogyny unleashes violent behavior that might not have been actively expressed if underlying hatred and fear of women wasn't present.

The bedrock idea uniting right-wing communities who condone violence is that white Christian men in the United States are under cultural and demographic threat and require defending—and that it is the Republican Party and Donald Trump, in particular, who will safeguard their way of life. This pattern is similar to that of political violence in the nineteenth-century United States, where partisan identity was conflated with race, ethnicity, religion, and immigration status; many U.S.-born citizens felt they were losing cultural power and status to other social groups; and the violence was committed not by a few deviant outliers, but by many otherwise ordinary citizens engaged in normal civic life.

They think a cultural status that was their birthright has been stolen from them; no wonder they are suckers for a fraudulent claim of a stolen election by a sociopathic politician. 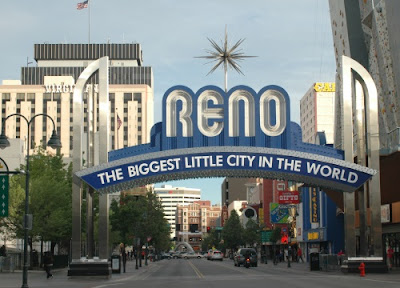 These angry folks exist in plenty here in northern Nevada -- as do plenty of other Nevadans intent on building a  pluralistic, somewhat free and easy, but hard working and prosperous, community. The clash between these currents are what this election is all about. Ah ... democracy.

Posted by janinsanfran at 6:17 AM