Of progressive U.S. activists and our futility 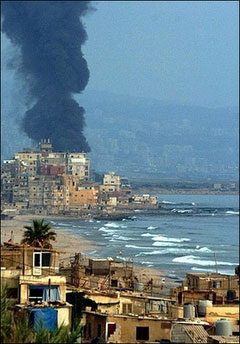 Smoke from an Israeli air raid on the Ouzai neighborhood of Beirut. (AFP/Hosam Chebaro)

SFMike wrote this in answer to Tina from Beirut in the comments on my previous post:

None of the Americans commenting here have a clear conscience at this moment, and frankly some of us are deeply ashamed. However, there's only so much we can do without being thrown in jail or murdered ourselves.

I probably should not be trying to talk about the Israeli attack on Lebanon, since all I really know of Lebanon is that I loved being shown this lovely, ancient, multi-faceted country on a visit last month. But I know a hell of a lot about what progressive activists in the United States can and cannot do. And meaning no disrespect to Mike whose Civic Center blog has given me a lot of inspiration in developing this one, I want to take his remark apart a little.

I don't think we here in the U.S. suffer any very immediate risk for expressing any kind of opinion, however vigorously. We can even -- if we are white, native-born, not really poor, of discernable gender, and live in an urban area -- "risk arrest" by slightly impeding the activity of the state and usually pay very little penalty. But we've arrived at a pass in which we know clearly, perhaps more than we could have in the past, the crimes of our regime, externally and internally. And concurrently we can't do a thing about them -- we are very nearly impotent in the face of the evil done in our name.

Here I write generationally, as one of the 1960s people, the leading edge of the Boomers who thought we were seeing the birth of a better, more racially equitable, more gender equal, perhaps even a less imperially adventurous, country. We sure were wrong, weren't we?

So how'd we get to our present futility? We made a mountain of mistakes and committed some pretty stupid errors of our own of course -- books have been written about them. Revolution in the Air and Which Side Are You On?: Trying to Be for Labor When It's Flat on Its Back come to mind.

But for the sake of simplicity, today I'm going to focus on one aspect of our failure: our confusion between winning the culture and winning power. Those of us who came up in the 60s not only lived in a time of great hope, we also could feel the zeitgeist was moving our way. Even those of our peers who were completely disconnected from the struggles for racial and gender justice and for peace were growing their hair long and adopting "anti-establishment" values -- who cared what the "straights" in suits and ties did in legislatures and executive offices? Elections were beneath us; we were the militant outsiders who were defining a new world. We were winning culture; who cared about the instruments of power grasped by those other people? They'd die off or have to come around eventually.

For a couple of decades, this posture actually seemed to give us momentum -- especially if we were economically comfortable white folks. After all, some women entered realms of activity previously unimagined -- and even queer folks began to live in the light of day. We were cool; they were stodgy old foggies. The world was troubled, but on the way to good.

Meanwhile, the right set about taking over the actual instruments of power, the institutions of government. Sure, they built up their own "cultural" institutions -- "Christian rock" and AM hate radio -- but they also knew where power was located and they wanted it. And gradually, they took it. Today we are probably one ancient Supreme Court justice away from living under a completely authoritarian regime cheered on by a compliant corporate media.

Now this simplistic picture of what the potential base of progressive people have been doing for the last 35 years doesn't really describe hardly anyone I know. Most of us have done quite a lot of things to attempt to actualize policies we believe in -- and some of us have been in various struggles our whole lives. But we have not started from a vision that said that winning political power was the necessary prerequisite to making any of the things we thought ought to happen in the world come true. And, consequently, when push comes to shove, as it has when our country directly commits mayhem in Iraq and Afghanistan and supports mayhem in Palestine and Lebanon, we can do nothing. So we blither -- and endlessly inform ourselves.

These days, I do see a new generation coming along that knows that they have to take power to make change. They aren't winning yet, but I don't think things are hopeless. Even the somnolent Democratic Party has gotten tired of being shut out and is building organizing infrastructure. And if the basic organizing gets done, that insight many of us had a lifetime ago that leading with culture works will again have great force -- and so long as it sells, we can count on corporate media to come around and sell our version of culture.

Meanwhile, we are stuck doing all the futile things that bear witness that another world is possible and we repudiate the right's imperial wars. Time to call our timid Congresscritters and remind them that they work for us, not just for the Israel lobby. Time to demonstrate where we can. Time to get creative and active and keep on keepin' on -- knowing that throwing the bums out and replacing them with our own bums is not beneath our dignity!
***
In the interests of further informing our weak efforts, let me suggest this corrective to CNN's disinformation. And after reading that, if you have a strong stomach, read this 2002 interview with an Israeli expert on asymmetrical warfare; based on this sample, I suspect he'd say that at this moment when the IDF pounds Lebanon, it is losing its war. (Via the brutally wise Bilmon.)
Posted by janinsanfran at 2:43 PM

Hmmm...interesting view on the current conflict. So if you had to pick a side to be on what would it be? Would you choose the side against islamic facism or would you side with the poor terrorists who are being attacked for no reason? Just wondering. I vote for no islamic facism.

Yikes, I see you have a "no islamic fascism" sympathizer lurking about your site.

That was a good "taking apart" of my rather melodramatic post about being "arrested" or "murdered" if we were actually effective at changing things, and I agree with all of your points, especially enjoying the phrase "So we blither -- and endlessly inform ourselves."

Tina's post from Lebanon reminded me of a time in the early 1970s when Kissinger and his cronies in the United States government had just finished helping to murder Allende and his supporters in Chile. I was 20 years old, traveling with a young French-Polish friend, which was how I ended up hanging out in a wildly interesting old Jewish communist household. (Note to FBI: They're all dead now.)

The household was helping out various refugees who had made their way north from Chile, and one young Chilean violently attacked me for being an American and being complicit in the murder and torture of her countrymen. The rest of the household defended me, saying it wasn't my fault as a "kid" for any of this, but in truth Tina's remark was very similar, and made me feel equally awful.

Your musings on "power," and how we need to get dirty and "replace them with our own bums" leaves me very ambivalent, but I'm pretty sure you're right.