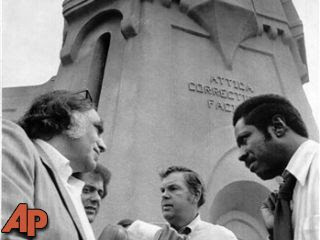 I read Saturday's obituary in the New York Times for columnist and reporter Tom Wicker -- and wondered. The focus was on his reporting from the midst of the chaos in Dallas the day John F. Kennedy was murdered and on his various subsequent positions with the paper.

That's not how I remember Wicker -- a writer I read regularly for several decades. For me, he was the voice of white establishment anti-racism. His was not a cutting edge position, but it was a vitally necessary contribution to the changes our society has accomplished over the years.

Above all, he was the voice of responsible understanding of how New York State authorities came to murder nine prison guard hostages and allow police forces to brutally assault hundreds of prisoners after suppressing the Attica prison rebellion of 1971. Black and brown prisoners trusted Wicker to be among the luminaries they invited to the prison to attempt negotiations with the state. Fellow Times columnist Anthony Lewis in an oped describes Wicker at Attica:

His view of the 1971 Attica prison uprising was a natural extension of his passion against racial discrimination. The prisoners — who famously called on Tom to inspect conditions and monitor negotiations with the authorities — were there for a reason; they were not the same as the innocent victims of racism. But here, as in the South, the men of power — Gov. Nelson A. Rockefeller of New York, and others — abused that power mercilessly. Tom wrote a powerful book about this experience: “A Time to Die: The Attica Prison Revolt.”

Hearing of Wicker's death, I thought to reread this book. Sadly, it seems no longer available from the San Francisco Public Library. That is not a good thing.
Posted by janinsanfran at 6:08 AM

Email ThisBlogThis!Share to TwitterShare to FacebookShare to Pinterest
Labels: gone but not forgotten, history, journalism, racism