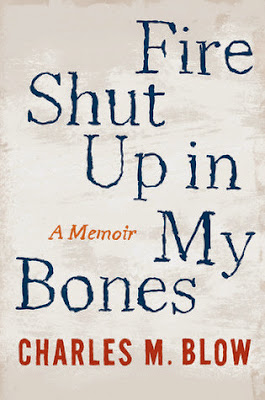 If, like me, you were introduced to New York Times columnist Charles M. Blow's Fire Shut Up in My Bones (the title comes from a phrase in the Biblical book of Jeremiah, that angry prophet), through the excerpt published in the Times magazine, you might think this was a story of coming to terms with a non-standard sexual orientation. Though Mr. Blow indeed "comes out" as bisexual in this memoir, that's only part of the story. As an old time queer myself, I appreciated viscerally the terror that a child in a gay-inhospitable environment can feel when introduced to their orientation by an unfeeling, often exploitative, older person.

But this is really a book whose center is violence, the violence of growing up poor, rural, isolated and Black, in addtion to being bisexual, in Louisiana in the 1970s and 80s. Charles Blow is a miracle -- maybe we all are, but this vital book makes a strong case that he's a particular one to whom we'd all do well to listen.

Some of the violence was at home.

The only time I ever saw a person actually shoot a gun at another, I was five years old, and it was my mother shooting at my father.

His mother had opened herself to his father after they'd broken off; evidence of his further betrayal led to the shooting. She missed, perhaps on purpose. She also refrained from blowing away one of his lover's who dared to come around when he was seeing his children.

In a family beset by betrayals, Blow was further betrayed by the older cousin who molested him, awakening sexual feelings he had no way to interpret in a place and situation in which he had no one to turn to for explanation. To be labeled "punk or "sissy" would have been to risk his life, literally. He struggled to find a safe way to be a man, in the sight of others and to himself, not always successfully.

There's not much evidence of a successful civil rights movement in this story. Gibsland, where Blow grew up, had a segregated cemetery then; in interviews about the book, he reports that it still does.

In Gibsland, our racial role playing was subtle and sophisticated. We had an unspoken understanding: we simply danced around each other, moving to a tune that everyone knew but no one sang ... I never heard or saw anything overtly unpleasant in public. That is, until the first time I was called a nigger.

... Hearing that word made me reconsider everything I thought I understood about my life. ...

I thought about how older black people tried to pass a fear of white men on to us. "If you don't act right, the police gone git you." "Police" was just a term of art for white men. Sometimes they dispensed with the euphemisms altogether and just said, "That white man is gone git you," pointing to any white man in sight. ...

I could easily have followed these racial cues: that white people were to be feared, to be kept at a distance, to be fed with a long-handled spoon. I began to internalize this fear. ... Luckily, I was saved from that fate by [his grandmother] Big Mama's relationship with a white family she worked for in Arkansas -- the Beales. ... it wasn't the working relationship that stood out and made the most difference to me as a young boy. It was what I registered then as their basic goodness to each other, their sense of sameness. My family's interactions with the Beales prevented racial fear and mistrust from taking hold. ...

Quite likely, Blow is a columnist at the Times today because he saw one humanly decent relationship between whites and blacks in his segregated youth.

Amidst all the violence Blow describes, I found most disturbing the tale of the physical hazing that he and other fraternity pledges at Grambling chose to endure to be admitted to the brotherhood. I am lucky enough to have come of age in a time and place in which the Greek system was viewed as a regressive artifact of a dying social order. (Would that we'd been right!) I've since come to understand that for some African Americans, these organizations provide support in a foreign and hostile white culture. But beating the shit out of each other seems kind of sick. He explains its rationale:

Brothers had to make pledging physically difficult so that the bond would be stronger -- the bond between individual pledges and the bond between them and us. Unspoken in it all, the subtext, was that the hazing, with its brutality and physical hardships, was supposed to connect us to ancestral suffering, providing a generational through line of punishment and perseverance, from bondage to fraternal bonding. Thus, the Brothers saw no wrong in it -- only honor and heritage ...

Blow eventually rejected the practice after having been elected president of his fraternity chapter. Blow does not explicitly address this, apparently preferring to speak of bonds within the fraternal group, but I cannot help wondering: was this violence through which young Black men sought to prove themselves yet another warped residue of our country's original sin, of slavery? That verdict is there in his language, intentionally or not. And he's a pretty darn intentional writer.
Posted by janinsanfran at 5:00 AM

I always think he makes sense whenever I hear him discussing an issue. Really like him but won't likely read the book as it sounds tough and I've seen too much of that in families I've known around here (white I might add).

The fraternities seem to me to be a lot sexual in their hazing and it's still ongoing as long as nobody ends up hospitalized. I have no use for sororities or fraternities. When I see the old ones coming back from their big events, they don't seem like they ever got past a lot of the superficial silliness that they think is cool or maybe youthful and to me looks ridiculous. I gave a sorority a try for a few months as a freshman moving into town from the country but just couldn't stomach it and bowed out before the final entry. I know it's about networking, meeting those who will be powerful but to me it's the good old boys (or girls) club. And not a good thing at all.