The US federal budget (a pre-primer)
and its religious critics 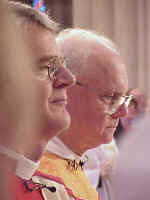 Yeah, the US budget. Do I go to sleep now or maybe I should take up watching paint dry?

And yet, and yet … people are going to live or die because of what the Congresscritters and White House conservative ideologues to get away with.

Here’s a handy guide to the process by which Congress writes one of these every year. The important thing to know is that they try, by April 15, to pass something called a “Budget Resolution.” This sets out the general plan for the actual budget. There’s a big fight over it, but things can change a lot in the next phases.

After the Budget Resolution, comes “Reconciliation.” This can mean some simple tinkering to make sure that general plan really fits with the facts – or it can be where tax cuts get proposed and programs get cut to the bone. The Center on Budget and Policy Priorities warns that the Republicans intend slip in making President Bush’s tax cuts for the wealthy permanent in this part of the process. And this is when they can decide how many people will lose their Medicaid to make up the funding gap caused by the tax cuts. Nitty gritty stuff. Reconciliation usually takes from May to August, sometimes longer.

Finally they get to the “Appropriations” phase. None of the foregoing ensures that any money is going anywhere. From September through December, Congress brings up and passes the various departmental appropriation bills, usually combined into great blockbuster monstrosities with something for everyone. These constitute the actual Federal Budget for the year ahead. The result is impenetrably complicated and ill-understood by most Congresspeople voting on it, because nobody could know all of it. If Congress can’t get it done on time, they pass “continuing resolutions” that keep money flowing to programs until they sort it out.

The process gives enormous power to Congressional leadership (all conservative Republicans) who can decide when elements will be voted on and what can be slipped in under the radar. The Democrats will do well if they can at least bring the worst budget decisions into the public light and force the Republicans to retract a very few of them.

So what are they going to do to us in this year’s budget? Well, we won’t hear about the spending they plan to do on their war in Iraq. That’s "outside the budget," a “supplemental” appropriation. Nice, huh?

But the general picture looks to include making the Bush tax cuts for rich people permanent and slashing programs for low income people from Medicaid to CHIP (children’s health plan) to the EITC (earned income tax credit). That last one is particularly vile – it would amount to a tax increase on the poorest earners.

It is not surprising that the Republican budget plan has mainline Protestant religious leaders denouncing it.

"Like many Americans, we read our daily newspaper through the lens of faith, and when we see injustice, it is our duty to say so.… The 2006 Federal Budget that President Bush has sent to Capitol Hill is unjust. … According to the White House's own numbers, this budget would move 300,000 people off food stamps in the next five years. It would cut the funds that allow 300,000 children to receive day care. It would reduce funding for Medicaid by $45 billion over the next ten years, and this at a time when 45 million Americans-the highest level on record-are already without health insurance.

…Some contend that works of mercy are not the business of the government but of private citizens. But in what other area of our national life do we formulate policies uninformed by our deepest values?

Some contend that with the proper support faith-based charities will step forward to fill the gap created by the government's retreat. But this flies in the face of the lessons that we, as religious leaders, have learned first hand. Our churches operate thousands of charities from the parochial to the international. Believe us when we tell you that neither we, nor our Evangelical brothers and sisters, nor our friends of other faiths have anywhere near the resources to turn back the rising tide of poverty in this country.

Nice to have the values guys (don’t seem to be any women among the leaders cited) on board for justice!

Posted by janinsanfran at 9:11 PM