Facing the gaggle:
U.S. Muslims and those cartoons 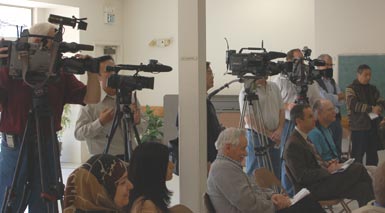 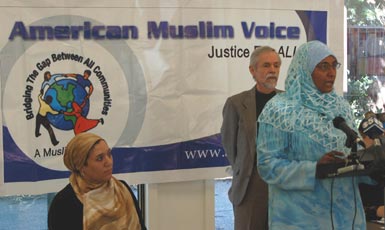 American Muslim Voice, the Council on American-Islamic Relations--SF Bay Area, and friends met the press this morning in a Congregational Church in Fremont, providing a local angle on the raging controversy over the Danish drawings of the Prophet. To no one's surprise, speakers condemned publication of the offensive cartoons, repudiated violent demonstrations against those who published them, and urged us all to realize that Islam is a religion of peace. The Oroville Mercury Register provides a thorough account.

While photographing the speakers, I found myself mulling the ritualistic quality of the event. How many times since 9/11 have U.S. Muslims and friends had to go over similar ground? Journalists kept asking whether they believed in free speech; the Muslims, all women, kept repeating that they practiced respect for others and deserved respect in their turn. 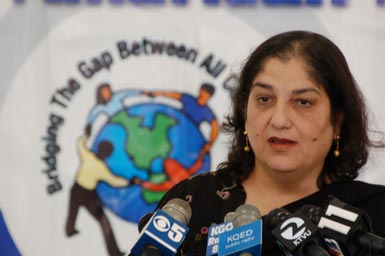 Samina F. Sundas of AMS shared one of the many hate mails they have received since the present fuss started; it proclaims "If you do not like my country, please leave." But this is Sundas' country. 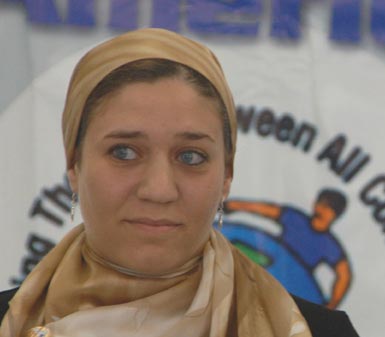 Safaa Ibrahim, executive director of local CAIR, vented her frustration: "I think there is an 'us versus them' mentality. I'd rather not be on the defensive. I'd rather just educate people about our faith." 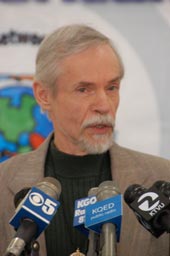 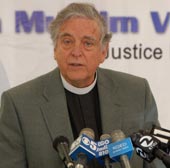 Does this ritual do anyone any good? In the end, I think yes, it does.

On the world stage, Muslims have real grievances. We, the U.S. and friends, run our economies on their oil, overrun their lands by force when we wish to, support authoritarian governments that repress them, and, above all, usually treat their way of living as inferior. The cartoon flap is a natural result; Eugene Robinson got it right in the Washington Post:

People don't normally burn down embassies over a few cartoons in a newspaper they've never even heard of, much less ever read. The widespread hair-trigger outrage, I think, grows out of a sense that the world of Islam has been used and abused for many years by a powerful and evil entity called "the West" -- and that this mistreatment is getting worse, not better.

But our local Muslims aren't part of that nasty stew. Their plaint is that they too are Americans -- why can't the rest of us understand that?

When spokespeople from the Muslim communities talk to the press, they are getting us accustomed to their presence. They are here. They aren't terrorists; they are simply people. They probably value freedom of religion more than some of our homegrown Christian theocrats; they have need of it. We rub against each other; we all change a little. That's just the way this country works, so long as we don't give in to the haters in our midst.
Posted by janinsanfran at 10:11 PM