An abrasive, too little visible, history 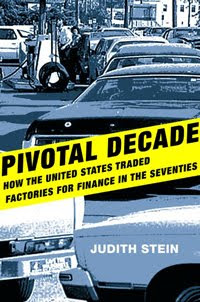 City College professor Judith Stein's Pivotal Decade: How the United States Traded Factories for Finance in the Seventies is a tremendously thought provoking effort to explain how the United States traded world industrial supremacy in the 1950s for our current finance-dominated economy. But I am going to have a hard time writing about it. Maybe that's the story I need to plumb.

As with many books I write about here, I read Pivotal Decade as an audiobook. Before I write about audiobooks, I usually get ahold of a print copy so I can offer quotations. But the San Francisco Public Library had never heard of this one. Nor had the academic library I can access through my connections. So then I looked for online chapters or major reviews; perhaps they would include long quotations I could use to anchor my reflections. Google turned up hardly anything.

In fact the only major discussion I could find of Pivotal Decade was part of survey of volumes about the 1970s by Rick Perlstein, the perceptive author of Nixonland. He's remarkably friendly to Stein considering his work is among histories she disses, but the descriptions he chooses to characterize her writing are might strong. Here are a few:

[She is a] distinguished historian of American industry... [but also] a historian of thunderous judgments ...

... Her rage gets in the way of the story she claims she wants to tell and takes it in another direction, one bearing the futile geriatric aroma of baby boomer ideological scores being settled. ...

... it is forty years later, and one hopes tempers have cooled. Stein's has not, and so her account of the Democrats' failed responses to the political and economic crises of the 1970s ends up being not false but not particularly useful, burying what is sharp and original under what is derivative, reductionist and sour.

... Her account of the 1972 presidential campaign ...is full of cheap shots. ... her account is jumbled by a lack of contextual empathy for a historical actor's partial view of his or her times.

... with an ahistorical gracelessness, Stein seeks to court-martial [1970s Democrats]..

Perlstein is actually appreciative of Stein's dissection of the economic realities of the 1970s -- but he's mightily put off by her abrasive argumentation and has substantive critiques of what she missed.

I get that. And I probably should share his ire, since I've one of those Sixties people who mostly prioritized the righting of race, gender and sexual orientation wrongs ahead of concern about the deteriorating prospects of the industrial working class. But actually I got a lot out of Stein's history and I garnered two insights from this difficult book that I know will stay with me. Evidently, Judith Stein pissed too many people off to get the sort of consideration I think this book deserves. Perlstein is very fair and smart; hardly anyone else has been.

Do us all a favor ... ask your library for Pivotal Decade.
Posted by janinsanfran at 2:01 PM

You're such a great reader, and thanks for putting out the word.

You've got a great Freudian slip typo, by the way, in your last bullet point which you might want to fix: "more cruel and more gentile expropriation" when I think you mean "gentle."

Thanks Mike. Correction made. You are such a good reader!