Remember Iraq? The US made wars there

Nir Rosen is a US journalist who has reported from Iraq and Afghanistan since 2003. In Aftermath: Following the Bloodshed of America's Wars in the Muslim World he explains the ethic that drove how he covered our wars:

I didn't think conflicts could be understood by studying only one side ...

Consequently Rosen didn't (usually) embed with US troops, though he certainly talked with the soldiers. But he learned much more by putting to good use what he labels his "melanin advantage."

....Although I am American, born and raised in New York City, I came closer to experiencing what it feels like to be Iraqi than many of my colleagues. ... I inherited my Iranian father's Middle Eastern features, which allowed me to go unnoticed in Iraq, march in demonstrations, sit in mosques, walk through Falluja's worst neighborhoods, sit in taxis and restaurants, and look like every other Iraqi. My ability to blend in also allowed me to relate to the American occupier in a different way, for he looked at me as if I were another "hajji," the" gook" of the war in Iraq. 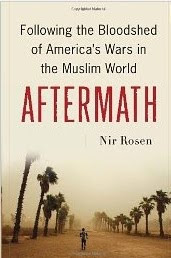 What he saw isn't pretty. The book is a 550 page chronicle of misunderstandings, ignorance, violence and futility.

For Iraqis, the US invasion brought first hope for a better life, then the humiliation of occupation by blundering and sometimes vicious foreign troops, then a civil war that formerly oppressed Shiites won and previously ascendent Sunnis lost. The invaders were never really in control of much of Iraq; how could a force that never exceeded 165000 really control a nation of 30 million? But wherever they were, they aroused opposition. A local leader described to Rosen what drove him into armed resistance.

The American occupiers, Sheikh Saad maintained, "push people to the ground and step on their heads. They arrest the relatives and wives of wanted men and hold them hostage. They are holding one hundred thousand Iraqis in their prisons. Iraqis have lost their dignity, and for this reason the resistance grows." Iraqis were incandescent over rumors that their women were being held prisoner by Americans.

The occupiers responded to the hostility of the occupied with house to house sweeps based on poor or non-existent "intelligence" (now there's a perversion of language) locking up huge numbers of mostly innocent Iraqi men. Rosen points out:

Few of the tens of thousands of Iraqis detained in the American-run gulags were ever even charged with anything. Few Americans question whether they had a right to invade a foreign country and arrest scores of its men every day on scant evidence.

Rosen, speaking the language and respecting the culture, was often able to see what troops never fathomed. He recounts a 2007 experience he had while on foot patrol in Baghdad with a US unit. This was during "the surge," driven by the new counter-insurgency (COIN) doctrine that aimed to "win hearts and minds" while suppressing violence.

The US soldiers had only the dimmest sense of what was really going on around them.

When President George W. Bush was about to leave office, he held a sort of victory press conference in the Green Zone. People in the United States wanted to pretend that the "surge" and an elected authoritarian Shiite government somehow made their war worthwhile. An Iraqi journalist threw his shoes at the US potentate. Rosen knows why:

... to Iraqis and anyone else sensitive enough to view them as humans, the occupation was one million acts of violence and humiliation or one million explosives. There was nothing for Bush to be triumphal about during his farewell press conference. Even the surge had exacted a costly toll on Iraqis. Thousands more had been killed, arrested, thrown into overcrowded prisons, and rarely put on trial, their families deprived of them. The surge was not about a victory. With a cost so high, there could be no victory. COIN is still violence, and the occupation persisted, imposing violence on an entire country. As Zeidi threw his second shoe in a last desperate act of defiance, he remembered these victims and shouted, "This is for the widows and orphans and all those killed in Iraq!"

Rosen offers a deeply uncomfortable glimpse of what empire wrought in the last decade. I know of no other recounting that comes close to the immediacy and energy of this book. And I believe he tells truths.
Posted by janinsanfran at 4:00 AM