If for nothing else, I'd delight in Walter Shapiro's One-Car Caravan: On The Road With The 2004 Democrats Before America Tunes for this snapshot of how campaigns really work:

As [Dick Gephardt's pollster Ed] Reilly explained, "In any campaign, you have that list of bad ideas that come up from the candidate, his spouse, his family, the fund-raisers. It's not worth the pain to blow these ideas out of the water yourself. You let the focus groups do that."

Yup -- that's the function of many focus groups: to blow the candidate or the campaign committee out of their complacent fantasies and show them how ordinary, unconcerned voters respond to their favorite arguments or turns of phrase. Depending on how out of touch they are, the experience can be shocking. 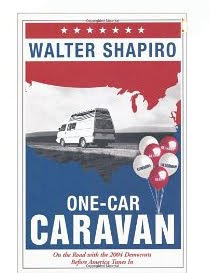 It also can be lucrative for the consultant or pollster who puts on the focus group because if the experience of watching your "little darlings" get stomped by citizens is traumatic enough, it can encourage dependence on the smart guy who showed you the inconvenient truth. Campaign consultants dance a complex dance; many are responsible professionals, good at their work, but the openings for abuse are many.

Shapiro's book is just what the title says, an account of the 2004 Democratic presidential field before any primary votes were cast, before Dean "screamed," before Kerry "voted for it before he voted against it," before Lieberman was revealed as a vengeful jackass. That story line seems ancient history. But this account of the nuts and bolts of a Democratic pre-pre-primary (such as we may see in 2016) is still great fun if you like that sort of thing.

Shapiro is not much of a fan of "issues" as the deciding factor in why people make candidate choices (and my experience runs in the same vein.) Thus we get this:

Personality may not be destiny -- or the ebullient Hubert Humphrey would have defeated Nixon in 1968. But in presidential primary politics, temperament matters more than any other factor beyond the direct conscious control of the candidates. Voters may not be able to decipher which of the candidates secretly felt inadequate as a child, but they can judge personality. …

Imagine waking up every morning fired up with the faith that today you'll raise $100,000, work out the kinks in your health-care plan, corral that elusive endorsement and rouse campaign audiences to a fever pitch. Imagine what it must be like to believe that the inevitable setbacks in a campaign are momentary detours on the road to fulfilling your destiny. But it's more than inner self-confidence. When radiating from a presidential candidate, optimism is contagious; it is the essential quality that convinces voters that, hey, he really means it; maybe this time we'll get a president who does something for me. TV coaches can teach a candidate how to smile on cue and even how to feign sincerity. But optimism isn't learned behavior; it is bred within the fiber of your being.

During the primaries we're searching for glimpses of what we call "character." Perhaps that insight says something about the current phenomenon of people warming to Mitt Romney less over time, the more they see of him.

Shapiro is not only insightful, he's thoughtful. I hadn't noticed this about horserace journalism:

Despite incessant coverage of the presidential race, the fact that three leading Democratic contenders have lost parents in the last two years is never discussed in print, not even as a way to explain a candidate's occasional dour mood or to put the ordeal of campaigning for president in a larger human perspective. No other subject is off-limits for political reporters -- not sexual escapades, youthful drug use or medical history. But parental death has long been a taboo topic.

He further points out that parental deaths tend to occur in the age group of these aspirants and that it can mark a real life change for mature adults. But about this one very human passage, we seldom practice our accustomed political voyeurism.

I suspect that Shapiro was not surprised by President Obama's difficult relationship with much of the Democratic electorate. Back in 2003, he described what he sees as a recurrent theme among Democrats:

Democrats have long been beguiled by the fantasy of the white knight president, the FDR-like leader who will somehow uplift the nation, inspire us to something greater than the next way or the next tax cut, and yet never lose his easygoing sense of authenticity. For sixty years, longer than most of us have been alive, the Democratic Party has been waiting for that transcendent next president. John Kennedy, for all the myth that has come to surround his memory, was too much a creature of muscular Cold War verities to measure up to this august standard when he was alive. Lyndon Johnson and Bill Clinton, such enormous talents in such flawed containers. And yet for all the disappointments and the undelivered promises, there is the enduring hope that maybe the next election will somehow fulfill these idealistic dreams.

No, Obama didn't fulfill our hopes either -- and I've read enough of the history of FDR to know that the populist left nipped at this heels throughout his presidency. We want a fairer, more caring country and we don't give up.

But One Car Caravan is something more than wise; it's fun. I'd go a long way to read a fellow who describes the profession of political journalism like this:

For let's face it, if political convention decreed that the 2004 campaign began with a three-legged race in Enid, Oklahoma, I'd probably make the trip and then spend my time worrying that 1 was somehow missing the Big Story.

You can read Shapiro's 2012 horserace coverage at The New Republic.
Posted by janinsanfran at 6:04 AM