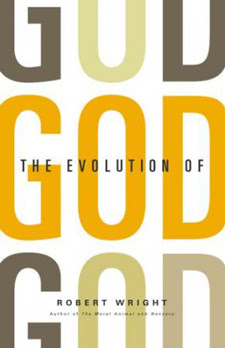 Robert Wright has been writing exceptionally sensible things about Iran in his Atlantic Monthly blog -- so much so that I figured I had better check out his big 2009 book, The Evolution of God. This was nominated for a Pulitzer prize for non-fiction and widely praised. So why was I surprised and disappointed by it?

Erasing its nuance, I would summarize Wright's thesis like this: globalization has been good for (the human imagination) of god. Warmed over current game theory and some facets of biological science agree, in the Beatles' formulation, "things are getting better all the time …"

Wright seems to have two audiences. The first is people who take their reading of scripture(s) very seriously and literally, probably most of them believers. Four fifths of the book is a once over lightly history of religious beliefs as embedded in Hebrew, Christian and Muslim sacred writings. I'm no scholar, but I've done a good deal of reading in this arena. The historical explication that Wright presents of these scriptures seems to me neither novel nor particularly interesting. Most modern scholarship takes for granted what he seems to offer as upsetting novel interpretations of the evident fact that human descriptions of god have changed over time. (If interested in a far more insightful tour of the Christian journey toward God, try Diarmaid MacCulloch's Christianity: The First Three Thousand Years. I haven't found any history quite as good for the Muslim story, but readers won't go wrong with Karen Armstrong's Islam: A Short History and/or Reza Aslan's No God but God.)

The other audience Wright seems to be addressing is secular intellectuals who are dismissive of religion and god. He writes as if looking over his shoulder hoping he has enough accumulated credibility and enough scholarly apparatus so he won't be thrown out of the club of serious people for this book. Hence this:

… occasionally I've suggested that there might be a kind of god that is real. This prospect was raised by the manifest existence of a moral order -- that is, by the stubborn, if erratic, expansion of humankind's moral imagination over the millennia, and the fact that the ongoing maintenance of social order depends on the further expansion of the moral imagination, on movement toward moral truth. The existence of a moral order, I've said, makes it reasonable to suspect that humankind in some sense has a "higher purpose." And maybe the source of this higher purpose, the source of the moral order, is something that qualifies for the label "god" in at least some sense of that word.

The previous sentence is hardly a fervent expression of religious faith; in fact, it's essentially agnostic. Even so, I don't recommend uttering it at, say, an Ivy League faculty gathering unless you want people to look at you as if you'd started speaking in tongues. In modern intellectual circles, speculating seriously about God's existence isn't a path to widespread esteem.

I was disappointed by this book because, at root I agree with most of where Wright is going here. I do believe that history is the story of "movement toward moral truth." That movement I have no particular qualms about naming "God" (capitalization intentional; this is Important!).

I live and work in a thoroughly secular environment where most folks view all religion as the last refuge of fools and bigots -- and in dreadful glare from the Republican primary, I'm not about to fault them for believing the evidence of their eyes. But still, but still -- there is in human experience a drive toward something better that keeps resurfacing when convention and everyday self-interest would seem to preclude it. I don't understand it, but I believe it is Good. That's important.
***
Steven Pinker's The Better Angels of Our Nature covers some of the same ground as The Evolution of God more thoroughly and, to my reading, more originally. Pinker is probably more skeptical of the god concept than Wright -- and utterly fascinating even when I question his conclusions.
Posted by janinsanfran at 6:00 AM