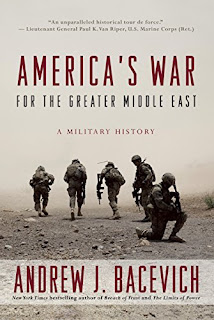 The subtitle is the true theme of Andrew J. Bacevich's America's War for the Greater Middle East: A Military History. A retired colonel, a professional Army officer before becoming a scholar, Bacevich brings a military professional's eye to decades of U.S. imperial folly, beginning with Jimmy Carter's commitment to keep oil flowing to an insatiable country, through Afghan wars I and II, through Iraq I and II, through Bosnia, Lebanon, the "Arab Spring," Libya, the Syria civil war and beyond. He judges all this violent misery harshly:

I should state plainly my own assessment of this ongoing war, now well into its fourth decade. We have not won it. We are not winning it. Simply trying harder is unlikely to produce a different outcome. ...

This is not a book that judges the morals and motives of U.S. leaders who stumbled from crisis to catastrophe leaving carnage (mostly for other people) behind. He's asking whatever were they thinking? What they thought they might accomplish? Why the military means employed seemed so utterly incapable of accomplishing much anything except destruction (mostly of other people)? And, so now what?

He's a scathing critic, for example of President Jimmy Carter who he describes as allowing domestic politics to lead him into blundering quagmires in Iran and Afghanistan:

... when it came to the exercise of power, Carter was insufficiently devious. He suffered from a want of that instinctive cunning that every successful statesman possesses in great abundance. ...he lacked guile ..."

But his real bile is directed toward his own profession, the U.S. military and permanent "national security" establishment. Victory in the Cold War

brought the armed services and their various clients face to face with a crisis of the first order. With the likelihood of World War III subsiding to somewhere between remote and infinitesimal -- with the overarching purpose for which the postwar U.S. military establishment had been created thereby fulfilled -- what exactly did that establishment and all of its ancillary agencies, institutes, collaborators, and profit-making auxiliaries exist to do?

The Pentagon wasted no time in providing an answer to that question. ... The Greater Middle East was to serve -- indeed, was even then already serving -- as the chosen arena for honing military power into a utensil that would maintain America's privileged position and, not so incidentally, provide a continuing rationale for the entire apparatus of national security. That region's predominantly Muslim population thereby became the subjects of experiments ranging from the nominally benign -- peacekeeping, peacemaking, and humanitarian intervention -- to the nakedly coercive.

Beginning in 1980, U.S. forces ventured into the Greater Middle East to reassure, warn, intimidate, suppress, pacify, rescue, liberate, eliminate, transform and overawe. They bombed, raided, invaded, occupied, and worked through proxies of various kinds. ... The results actually produced over the course of several decades of trying have never come even remotely close to satisfying ... expectations.

I appreciated this book. I learned from this book. But throughout I felt (as well as understood even if only incompletely) that far too much was missing. In particular, Bacevich never really integrates the impact of the festering moral wound that was and is Israeli theft of their homeland from Palestinians. That lurks there in the background; this history cannot be written without bringing it to the foreground, despite its adding new layers of complexity.

Bacevich's lumped together region -- his Greater Middle East -- has little texture, few sub-genres, not nearly enough local quirks, and hardly any diverse people in his telling. U.S. readers have access to far more granular and human accounts of what we have wrought. I recommend especially Anthony Shadid's Night Draws Near on Iraq before we facilitated that country's dismemberment and Rajiv Chandrasekaran's Little America: The War Within the War for Afghanistan.

But I would recommend this book as well. There are so many vantages from which to condemn the ongoing national war folly ... we need them all.
Posted by janinsanfran at 5:00 AM