Where does hope reside?

For many years, my Jewish Christian partner and I have been privileged to participate in a Passover Seder meal and observance organized by a very Jewish group of lesbian women with whom we've been meeting for nearly 30 years. Last night we once again made our way through an idiosyncratic Haggadah which straddles the divide J.J. Goldberg of the Forward chronicles between Passover as recounting "the suffering and persistence of Jews in a hostile world" and a contemporary "solidarity-with-the-downtrodden version model."

Years ago, the latter seemed much on point: our participants, though Jewish to their cores, were women and lesbians, outsiders identifying with other outsiders. Today, in the ascendancy of Trumpian blood and soil anti-Semitism, the former understanding seems immediate as well.

This year we were asked to volunteer the name of a Jewish woman who "participated in the rebirth of her people." I hesitated to join in this exercise. This is not my show ... 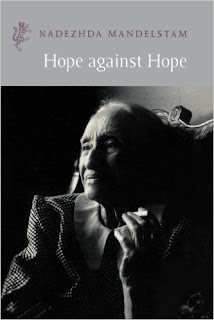 But I have recently encountered a woman of Jewish ancestry whose story is most certainly, in part, that Jewish ancestry both made her an conspicuous target for elimination and, perhaps, helped her find the grit to be a survivor.

Nadezhda Yakovlevna Mandelstam was born into a middle class Jewish family in southern Russia in 1899. Her family sought to rise in their world, moving to Kiev (now Ukraine) and converting to Christianity. In Kiev, the young Nadezhda met the prominent poet Osip Emilyevich Mandelstam, who also came from attenuated Jewish roots. They married and moved to Russia proper. They supported the Bolshevik Revolution of 1917, but quite quickly came to realize that it was delivering a vicious dictatorship, not the renewed society which they had sought. Osip wrote a satirical poem condemning Stalin's totalitarian state and was henceforth marked for literal erasure. It certainly didn't help them that to Russians, conversion be damned, their Jewish ancestry marked them as outsiders.

Hope against Hope is Nadezhda's memoir of the couple's years spent watching an inescapable fate chasing them. The poet was arrested twice; the second time in 1938, he died as so many of Stalin's victims -- those who escaped a bullet to the back of the neck -- did: of disease, hunger and cold in a camp in the frozen hinterland.

Nadezhda memorized all Osip's poetry, not daring to commit it to paper, and spent decades scraping by in Russia's eastern towns, sometimes only a step ahead of eager functionaries who sought a scalp from denouncing her. She was only able to return to civilization -- to Moscow -- in 1964. And there she wrote Hope Against Hope. The title is a pun; Nadezhda means "hope."

Her story is a rising crescendo of horrors, made the more powerful by matter of fact, seeming simple, narration.

On what they lost and learned amidst Revolution and terror:

To think we could have had an ordinary family life with its bickering, broken hearts and divorce suits! There are people in the world so crazy as not to realize that this is normal human existence of the kind that everybody should aim at. What wouldn't we have given for such ordinary heartbreaks!

... Should one lie? May one lie? Is it alright to lie in order to save someone? It is good to live in conditions where one doesn't have to lie. Do such conditions exist anywhere? We were brought up from childhood to believe that lies and hypocrisy were universal. I would certainly not have survived in our terrible times without lying.

... Every family was always going over its circle of acquaintances, trying to pick out the provocateurs, the informers and the traitors. After 1937 people stopped meeting each other altogether ...

She reflects on how the people of her privileged intellectual circle came to wish for something better than czarist Russia -- and found themselves flotsam in the aftermath of war and chaos.

There had been a time when, terrified of chaos, we had all prayed for a strong system, for a powerful hand that would stem the angry human river that was overflowing its banks. This fear of chaos is perhaps the most permanent of our feelings -- we have still not recovered from it, and it is passed from one generation to another. ... What we wanted was for the course of history to be made smooth, all the ruts and potholes to be removed, so there should never again be any unforeseen events and everything should flow along evenly and according to plan. This longing prepared us, psychologically, for the appearance of the Wise Leaders who would tell us where we were going. And once they were there, we no longer ventured to act without their guidance and looked to them for direct instructions and foolproof prescriptions. ... In our blindness, we ourselves struggled to impose unanimity -- because in every disagreement, in every difference of opinion, we saw the advance of new anarchy and chaos. And either by silence or consent we ourselves helped the system to grow in strength and protect itself against its detractors ...

My brother Evgeni Yakovlevich used to say that the decisive part in the subjugation of the intelligentsia was played not by terror and bribery (though, God knows, there was enough of both), but by the word "Revolution," which none of them could bear to give up. ... It is interesting to note that in the case of people concerned with art or literature, total rejection of the existing state of affairs led to silence, while complete acceptance had a disastrous effect on their work, reducing it to mediocrity.

On her long-delayed return to the Russian capital in the 1960s, this survivor of terror encounter a surprise.

Among the new intelligentsia now growing up in front of our eyes, nobody blithely repeats old sayings like "You can't swim against the tide" or "You can't make an omelet without breaking eggs." In other words, the values we thought had been abolished forever are being restored, and they must be taken account of, even by people who could do quite well without them. This has come as a surprise both to those who never gave up those values and to those who tried to bury them once and for all. Somehow or other they lived on underground, taking refuge in all those hushed homes with their dimmed lights. ... But it is not only the intelligentsia that preserves values -- the ordinary people kept them alive even during the darkest times, when the so-called cultural elite was repudiating them.

This is not a hope-filled book. It's a barely-alloyed encounter with personal and social despair. It can only serve to express hope, if one believes, as Nadezhda seems to, that an unflinching, truthful, encounter with reality is the sole route forward. From that stand point, counter-intuitively, I found this volume a source of hope in a bad moment.
Posted by janinsanfran at 5:00 AM

Wow. Really good post.
Must read this. It sounds like hers is a unique perspective on the Jewish experience. So much to think about, so much to say.

Mandelstam is not self-consciously Jewish; don't want to give you the wrong impression. Yet, knowing the gut anti-Semitism of the Stalin years, it's hard not to think that the Mandelstams' Jewish origins weren't part of an ugly story, so much larger and mostly so commonplace during the terror years.