What's it like to live across from a shelter? 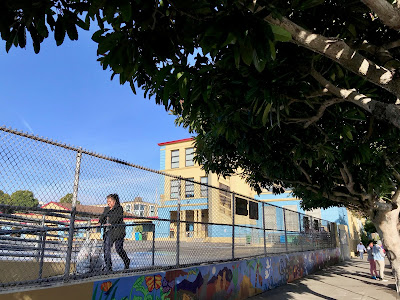 If I wasn't aware that the Buena Vista Horace Mann (BVHM) Stay Over Program (SOP) for homeless families was using the gym across our street every night, I'd have no idea the school was serving as a shelter for students and parents. The shelter program doesn't cause a ripple around here. I notice the woman who delivers meals in the morning when she competes with everyone else for parking, but that's about it.

Teachers heard from children that they wished they could stay at their school overnight; miraculously, both the school district bureaucracy and city politicians got onboard with the idea a year ago. Demand was slow to pick up, but now the program seems to be going well.

The City Controller's office has released an evaluation with some statistics:

A total of 55 families, or 183 individuals, have used the shelter since the program began.

... The current contract runs until June 30 and costs $1.2 million for ongoing operating expenses, according to the controller. That factors out to about $35 per bed a night.

Who is using the space? According to a summary of the Controller's report, the population looks a lot like most of the families I see around the school every day.

...74% of individuals connected through the SOP identified as Latino and at least 32% speak Spanish as their primary language. The Controller’s Office found that the program has provided a culturally responsive service that directly meets the needs of Spanish-speaking families experiencing homelessness or housing instability for the first time.

... The Controller’s Office also found that the services at the SOP include unique features not present in other congregate emergency family shelters. For example, the BVHM shelter provides language services, showers on-site, a secure storage area, and families can reserve space at the shelter for multiple days at a time. The Controller’s Office found that nearly all participating families were assessed at an Access Point, where families can access the system of care and available resources.

Given the number of unhoused people now living in the city, this is a drop in the bucket. But providing for needy kids at a place they already trust seems a major initiative, beyond its small scale.
Posted by janinsanfran at 2:11 PM