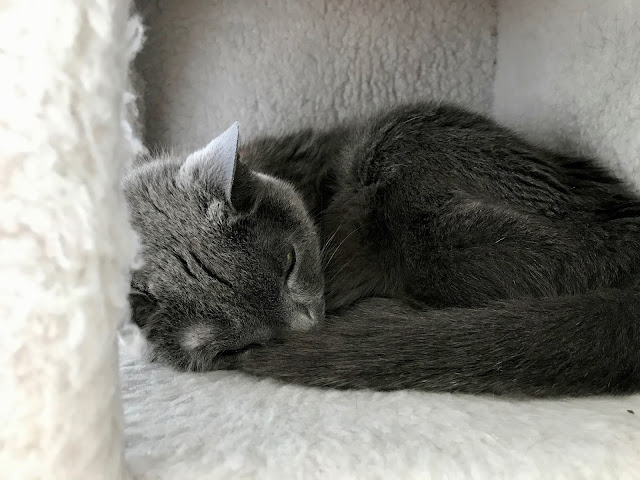 Morty is tired these days; he enjoys his naps.
...
As a bonus to today's cat blogging, here's another tidbit picked up from The Reformation: A History by Diarmaid MacCulloch. In 1645, William Laud, the archbishop of Canterbury, lost his head -- literally -- in one of the twists and turns of that great political and theological struggle which was the English Civil War. Laud's version of an Anglican compromise between full-on Reformed Calvinism and Roman Catholic papism couldn't stand in a time when it was allied with an unskilled, unpopular monarch, Charles I -- who also lost his head. Laud promoted the ascendancy of bishops, ceremony in church ritual, and was raised up as a martyr of the faith once the tide of Puritan rebellion receded.

MacCulloch is gently caustic about Laud but appreciates one of the man's virtues.

Laud was prominent in a royal regime that after 1629 ceased to trouble itself with meeting Parliament and instead tried to sort out England's problems with royal proclamations ...

Laud had a reputation for being kindhearted to the poor, and he showed engaging affection for his pet cats and his giant tortoise (a beast that survived all the subsequent upheavals at Lambeth Palace until it was accidentally killed by a gardener in the mid-eighteenth century.) ... His orderly mind and humorless dedication appealed to King Charles, another self-contained little man; between them they showed no awareness that they might need to inspire popular enthusiasm for the innovations in religion they now foisted on a horrified Church of England. ...

In the Laudians' zeal to make worship and church interiors more holy, they offended against long-standing silent understandings of religious behavior. They even tried to stop people bringing their dogs to church. The English were already a nation of dog enthusiasts if not dog lovers, and they tolerated dogs in church on the same basis as children, as long as both groups behaved themselves. There was much fury among churchgoers at the cat-loving archbishop's intolerance. ...

Dog people against cat people -- from such divisions are deadly polarizations launched.