You have been advised ... 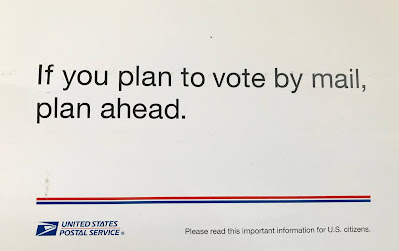 I received my Terms of Service yesterday from the U.S. Postal Service. Did you?

Trump's Postmaster General Louis DeJoy and the rest of his grifting crew of second-rate union busters want to be sure they are off the hook for whatever screws ups they achieve in moving election mail. So they resorted to the same dodge that app developers use to indemnify themselves for any damage by their product. You have been warned. There's not much you can do about it, but hey, we told you.

If you are in California, there doesn't seem to be anything wrong with what the small print on the back says about how your ballot will be handled. Anything wrong, except that, it is hard to trust an entity which is ditching its commitment to service.

In Colorado, an all-mail ballot state, says the USPS diktat conflicts with state law. The courts will decide that one.

Voting by mail is most likely safe, if you do it before the last minute. But we do all have to make a plan just to make sure ... In that, the USPS is right.

Posted by janinsanfran at 7:27 AM

There was much debate on FB whether you add postage. This card makes that very clear.

In the two states I know the most about, California and Nevada, the ballots come postpaid -- no stamps required. It depends on where your live. In some states you have to find the stamps. Pay attention out there!

Ballots are postpaid in Washington as well. I take mine and hand deliver it in the ballot box behind our courthouse however.