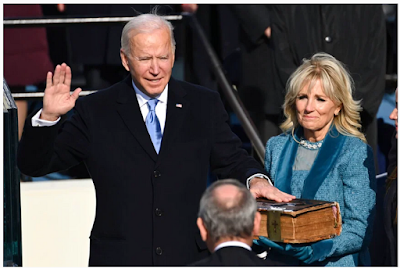 Michael Sean Winters, who covers the nexus of religion and politics for the liberal National Catholic Reporter, can hardly contain his delight in the inauguration of Joe Biden.

Wednesday, Jan. 20, was a very Catholic day. It began with the president-elect bringing the political leadership of the nation to Mass. ... Once he had taken the oath of office, the new president gave a speech that was heavy on themes found on every page of Catholic social teaching: the dignity of the human person, the commission to serve the common good as the first justification of government, the value of democracy in protecting human dignity and both requiring and evidencing equality, the virtue of solidarity.

President Biden seems such a normal specimen of an establishment white man that it's hard to remember he's doing some path breaking. He's only the nation's second Catholic president. I'm old enough to remember that the election of John F. Kennedy in 1960 was greeted by many white protestants as a threat; would this young man call up the Pope in Rome about his every move? My mother, the cradle Republican Party activist as well as a cradle Episcopalian protestant, remembered toying with supporting Gov. Al Smith's candidacy in 1928 as the height of her youthful transgressions; Democrats had made Smith the first Catholic presidential candidate.

Today, Biden's Catholicism seems comfortingly conventional to the majority electorate that put him in office. They may be a little surprised; his Catholic justice tradition comes with a lot of backbone.

Winters meanwhile is appalled by the letter some of the hierarchs of his church sent the new president:

... Apparently, the leadership of the U.S. bishops conference, before it had even heard the speech, chose to range itself among those unwilling to "come together to carry all of us forward." Los Angeles Archbishop José Gomez, president of the conference, issued a churlish statement. .... He acknowledged there would be areas where the bishops could work with the new administration but also warned that Biden had "pledged to pursue certain policies that would advance moral evils and threaten human life and dignity, most seriously in the areas of abortion, contraception, marriage, and gender." ...

There's a familiar whiff of prurience in the Catholic bishops concerns. The gentlemen seem awfully obsessed about what people do with bodies ...

Winters is having none of it:

... I am sure the leadership at the bishops' conference would be treating any Democrat shabbily. But I think what makes them really crazy is the fact that they realize, at some deep unconscious level, Biden did more in 24 hours to remind the American people that the Catholic Church can be a force for good in our country than the bishops' conference has done in 10 years. ...

The Biden presidency will certainly highlight the divides in the Roman Catholic Church, roughly a quarter of the U.S. population.

To my knowledge, there's not a lot of commentary about what religious affiliation, if any, Kamala Harris brings to her path breaking new position. The biography I discussed last week doesn't to my recollection mention her religious affiliation; it's a California-oriented book after all. (I can't check this and might be wrong; I don't have a hard copy.)

Apparently Harris is a Baptist. Her South Asian Indian Hindu mother and Jamaican leftish intellectual father assimilated to the Oakland of their time by sending their daughters off to the 23rd Avenue Church of God where she sang in the choir. She has shown on the campaign trail that she is well versed in the language of protestant Christianity, as well as comfortable with her mother's tradition and her husband's Jewish heritage. So Californian ...

Meanwhile, our racist Christianists cope with her disorienting ascent by labeling her a Jezebel. They are non-plussed as so often by contemporary reality.

Evangelical Christians: but how can they?

A coming out for liberal religion

Posted by janinsanfran at 7:55 AM

Enjoyed reading your commentary here. I remember well the concerns raised about JFK and his religion. Evangelicals have certainly lowered the bar on what it means to be a protestant Christian IMHO. i wonder if their position attracts a greater number of people than those repelled by it? Perhaps we’ll never know.