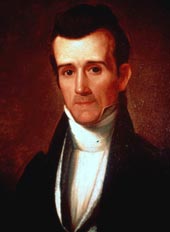 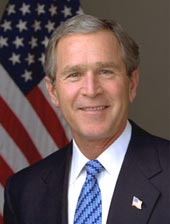 Los Angeles Times political pundit Ronald Brownstein had the interesting idea of comparing George W. Bush's presidency to that of little remembered 19th century Democrat James K. Polk. Polk won office in 1844 with a tiny popular vote margin, governed as if he had a huge mandate, and led the nation into an extremely unpopular war against Mexico. Brownstein draws remarkably bland lessons:

It's worth considering Polk's record not because Americans will take up arms against each other anytime soon — although you might never know that from listening to talk radio — but because it suggests that a president who slights the need to build national consensus can seed long-term problems that aren't immediately apparent amid short-term successes. ...

Bush, like Polk, launched a war whose initial justification has spawned bitter dispute....

Bush would place the nation's security on a more stable foundation if he worked harder to find a consensus agenda with those critics whose assessment of the threat in Iraq and at home was closer to his own.

I don't share Brownstein's apparent hope that offering mild suggestions to GWB will moderate his behavior because he wants to improve his place in history. But having dropped out of academia so as to interact with history as an activist for justice instead of as professionally cautious scholar, I'm willing to offer some broad, sweeping comparisons. The contradictions that Polk's presidency revealed between geographical regions with profoundly different cultures and economic interests led to civil war twelve years later. The U.S. was a rising power, energetically colonizing a continent and on the verge of creating vast wealth. Polk governed in the interests of the losers in the civil war, but nonetheless laid a territorial foundation for future prosperity.

The U.S. today is learning that military and economic power has limits. Bush's presidency is likely to be remembered as a destructive detour by a society forced to adjust to the reality of being one nation among many that share a fragile planet.
Posted by janinsanfran at 1:35 PM

It's an interesting look at two presidents. In many ways I think there are some parallels, however the things George is attempting deviate greatly from Polk's efforts. George is not only failing to build a consensus he's quite literally working over time hammering wedges in place.

Not only has a he got us cornered in an unpopular and likely illegal war, that can't really be won.

(It's basically the argument of is it a war or a liberation...) If we aren't there as an enemy to subdue the country, but rather to liberate... well we already covered that the Bush administration couldn't build a consensus in the US, how would they hope to do that in a place like Iraq?

But to top it all off George is actively battling the Constitution and violating the rights of US citizens. This is not something that can be explained away as "keeping us safe." If you buy that then more study of World History is required.

I agree fully though that this does in fact "seed long-term problems that aren't immediately apparent" -- that after all is the nature of why our Liberty cannot be compromised in the name of safety. Tomorrow it will be abused far more and more again the next day. It is human nature and not likely to change.

You also stated, "The contradictions that Polk's presidency revealed between geographical regions with profoundly different cultures and economic interests led to civil war twelve years later." I'd agree with that as well and think that the parallels between this Presidency and Polk must be watched. Polk may have started a pattern that lead to the violation of States Rights which in turn lead to Civil War. Let us hope that our current King George does not have a similar effect between now and 2016.