The puzzle of Cesar Chavez and the United Farm Workers Union 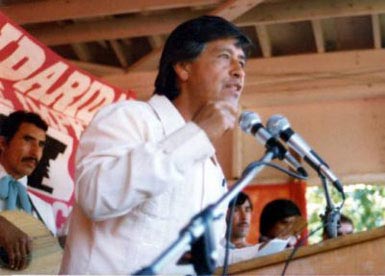 Cesar Chavez at a Coachella Rally, 1975 © Carlos Legerrette; from the archives of the Farmworker Movement Documentation Project.

The LA Times is publishing an intentionally disturbing series on the heritage of Cesar Chavez and the union he founded, the United Farm Workers Union. The tenor of pieces is caught in the first headline: "The UFW betrays its legacy..." I believe this reporting is mostly true, in the sense of being factual. However, is the LA Times indictment of the United Farm Work Union fair? That, I am not so sure about. Here's my take on the series and the paradoxes it points to.

The first article charges that the contemporary UFW represents very few farmworkers. Today the UFW seems more interested in promoting the deceased union founder's name and raising money through direct mail appeals than in organizing the people in the fields. The second explores the web of interlocking nonprofit enterprises run by Chavez' successors, mostly relatives. The third tells the story of the blow ups within the union in the mid-1970s after it had partially won a legal structure within which to unionize California agriculture. Chavez believed his leadership was being challenged by a series of organizers and farmworkers. Many who had devoted years to La Causa were forced out; the LAT reporter dates the decline of the union from these episodes.

In the interest of full disclosure, I should say I worked for the UFW twice, briefly, first on the grape boycott in Boston in 1970-1971 and again in New York City in 1972. Later, when located in California, I reported on the UFW for various alternative and religious media through much of the 1970s and volunteered on the San Mateo County boycott. I was never anywhere near the center of the union/movement, just a peripheral staffer, supporter and observer.

Yet the gist of what the LA Times reports rings true -- but not as the whole story. Here's how I see it: in the 1960s and 70s, Cesar Chavez' United Farm Workers Union was a stirring, seething locus of social creativity, bound together by its founder's charisma. It was a multi-headed beast, providing structure and meaning to very different tendencies and constituencies. Nobody straddled all these tendencies but Cesar Chavez himself. Not surprisingly, as the movement grew, tensions between devoted workers who emphasized different parts of this complex package within the movement only increased.

I wasn't around for "the purges" of the late 1970s (some described in the third LA Times article) but the centrifugal forces in the movement were obvious well before that era. As the UFW both grew more powerful and met ever more ferocious, organized resistance from the corporate agriculture, it is not at all surprising to me that it could not contain all its potentialities. As early as the spring of 1973, I saw workers picketing their own union headquarters in Coachella to protest arrogant local leadership. And I certainly saw for many years a UFW culture that treated speaking about any of the strains within this extraordinary movement as a form of treason. 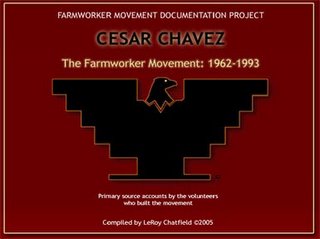 Over the last few years, Leroy Chatfield, one of the early pillars of the organization, has re-contacted over 1000 of the people who worked for the UFW between 1962 and 1993. He solicited reminiscences, collected songs and pictures, and began an email discussion list -- all to capture for history some of the knowledge and passion among these veterans. Much of this material is available on the web at the Farmworker Movement Documentation Project. Chatfield won wide participation by scrupulous refusal to tamper with any voices: "All primary source accounts have been included, and none... have been edited for content, length, voice, or tone." Unfortunately this unedited inclusivity makes the collection is a bit hard to navigate; it simply presents all the collected essays in a rough chronological form, leaving it to the interested browser to sort through its remarkable riches.

For many participants, the Documentation project provided a stimulus to mull over the issues raised by the LA Times articles: what was the UFW? Why was it so important in the lives of so many? Did it succeed or fail? What was its core? Why are farmworkers still unorganized and vulnerable to exploitation? The stories and answers are many; I haven't begun to read them all but anyone interested in going deeper can find much here.

I want to offer some thoughts from one of the essays in the collection as a counterpoint to the LA Times. It is easy, years after the fact observing the remnants of this once vibrant movement, to condemn much about it. But that fails catch what drew so many to give so much. Jim Holland was the building contractor for Chavez at the UFW's first headquarters in Delano from 1965 to 1967. Like many, he left other work to join Cesar, was changed by doing so, and moved on to other justice struggles. (Full disclosure: Holland later taught me the rudiments of construction in the 1970s.) He tries to make sense of this life changing experience:

I have recently...wondered why I felt so strongly, so clearly, that Cesar was a great man. There were two reasons. First, his complete commitment. We all know that the struggle was his whole life. Everything. In the years following my full-time employment by the farmworkers’ union, I came to know the leaders of a number of low-income groups. Several of them had Saul Alinsky connections. ... None of them came close to Cesar in terms of commitment or overall stature. The other truly outstanding characteristic of Cesar was his absolute incorruptibility. Many--not all--of these guys were easily bought off by money, status, or any of the other temptations we all experience. Not Cesar.

Probably inevitably, Chavez' multifaceted movement didn't last, but the ripples he set off are still running outward from his work.

UPDATE: The final part of the LA Times series appeared today. It is not really about the UFW. Rather, it celebrates the story and hopes of Eliseo Medina who, coming from a background in the UFW, oversees Service Employees International Union operations in 17 states in the South and Southwest. The reporter clearly believes that Medina represents a new kind of leader for new times, one who can organize a movement as vibrant and creative as the UFW was thirty years ago. Low-wage workers certainly need such a movement just as much today as in Delano in 1962.
Posted by janinsanfran at 9:20 AM