Defending a scurrilous press in a democracy 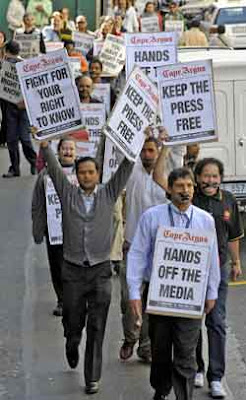 Derrick Z. Jackson, columnist for the Boston Globe, has raised the alarm about press freedom in South Africa.

Embarrassed by media coverage of scandals in [President] Zuma's family and of profiteering by public officials even as millions struggle in poverty, the government has proposed a "Protection of Information Bill." His party, the African National Congress, is calling for tribunals to regulate the media. Earlier this month, a journalist was arrested after reporting that the national police commissioner may have may questionable business dealings.

Under the bill, the government could define so-called "sensitive information" as anything deemed in “the national interest.’’ It has aroused vigorous opposition, and not only from media organizations. Nobel Peace Prize winner Desmond Tutu last week spoke out against the measures as "something that virtually everybody rejects."

When guided by leaders such as Tutu and Nelson Mandela, South Africa developed a rare moral authority that would be tragic to waste. If the country fritters away freedom of the press, it would almost assuredly embolden less democratic nations to clamp down even harder.

The measure definitely seems a frightening move toward authoritarianism. The African National Congress (ANC) almost completely dominates the political scene on the strength of having led the long struggle against apartheid. Politics in South Africa take place as much within the ANC's factions as outside it or in opposition to the party. It could probably brush aside pesky complaining voices while retaining much popular support. That way leads to terrible governance as people in the United States discovered during the period of emotional national unity after 9/11 when President George W was riding high and leading the country off a cliff.

Alerted by Jackson's column, I decided to read a few South African sources on the press law. Not surprisingly, journalists are protesting.

Scores of journalists staged a silent picket outside Parliament's main gates at lunchtime on Thursday. Forming a line along Cape Town's Plein Street, they presented a phalanx of placards to passing motorists, many of whom hooted in support.

"Keep the Press Free", "Hands Off the Media" and "Fight for Your Right to Know", the posters proclaimed.

Savvy writers also point out that media censorship ain't what it used to be in the bad old days before widespread connectivity.

Government needs to realise that this is the 21st century and you can't stop the flow of information because it's not a one-way street anymore. ... Domestic workers, delivery guys, drivers, shop assistants, shelf packers, tellers -- they’re all getting their news online via their cellphones. It is no longer the domain of an elite middle-class. The truth will out, no matter how many laws you pass or how much time you waste. So ditch the act.

But other South African writers are less quick to reassure themselves -- or to make a blanket condemnation of the government. Stephen Grootes in The Daily Maverick took a stab at understanding ANC spokesperson Baleka Mbete's arguments for the "Protection of Information Bill" in a local forum.

For her, it is also about dignity, about how people are treated in the press. This is an issue that the Western-style media (we spent ages looking for the right phrasing here, but we think you know what we mean) we have in this country hasn't actually come to grips with at all. The nicknames, the use of first names in headlines, the damage caused to children at school because their parents are in the headlines, all of this, matters to Mbete and many, many people like her it seems. ...

When the ANC says it has "the people" on its side, perhaps we shouldn't rubbish the claim immediately; we may find that it actually does, and partly because of this issue of respect for elders that is so incompatible with the notion of meritorious society on which the Western-style media is based. It's not enough to just say that if you sought public office you have to take what's coming to you. Many ANC politicians and the party's supporters simply aren't built like that. To them dignity matters in a way it simply can't to a person who grew up thinking they were a master of the universe. The media should take this issue seriously and find ways to make its point. ... And a discussion should be had about this. We ignore it our own peril.

Because I worked briefly in the press in South Africa (in 1990, as apartheid was ending but before majority rule) I bring some small amount of nuance to thinking about this situation.

South Africa inherited some proud traditions from "Western-style media", but it also got a heavy dose of the dregs. The now-defunct tabloid where I worked was a "struggle" (multi-racial, anti-apartheid) publication, but it was also trying to survive (barely) in a capitalist market. It had to sell eyeballs to advertisers in competition with purely commercial papers. The local standard looked a lot like Rupert Murdoch's vicious and sleazy New York Post. So our outfit went along with the local standard, publishing prurient, stupid and even dubiously accurate stories to attract notice in the crowd. I particularly remember the time the front page led with a picture and story about an unfortunate young West African who had stowed away on a freighter and jumped ship in Cape Town, all because unable to find a way to live as person of indeterminate gender. The style is unfortunately familiar from supermarket check out lines. 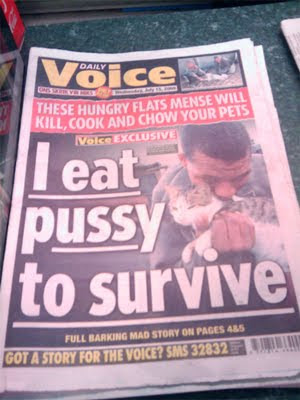 The sensational style is pervasive in the South African press. It's not surprising that those elements of the ANC who want to rein in the freedom to criticize government figures can arouse popular revulsion against the media's failings and excesses.

People in the United States should not be smugly confident that a turn against press freedom on the basis of sheer disgust could not happen here. In addition to contemporary Murdoch/Fox News/supermarket tabloid entries, our history is full of corrupt sensational journalism from Thomas Jefferson's purchase of a writer to do hits on his political opponent John Adams through William Randolph Heart's ginning up a U.S. war to conquer the fading Spanish empire.

That stuff sells and always will. To be defensible, journalism has to prove its worth to democracy -- to most people -- in every generation. South Africa is a grand experiment in transition from one of the worst systems of oppression ever invented to a difficult democracy that has to hold the allegiance of people from many cultures and standards of living. I marvel at its difficulties and wish it well.
Posted by janinsanfran at 3:00 AM