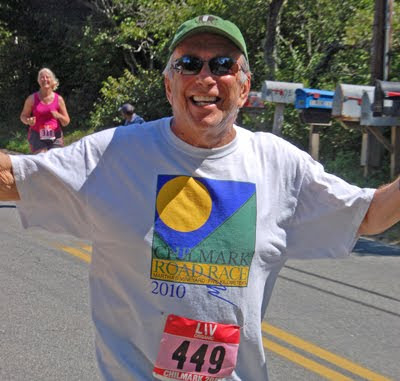 My friend Sam was having a great time in the Chilmark 5K Road Race. You might not guess by looking at him, but he's 81.

This lazy summer, I'm reading Play: How It Shapes the Brain, Opens the Imagination, and Invigorates the Soul by Stuart Brown, MD. It's a little pop-psyche-ish for my tastes, but there's something to it.

Brown describes learning from scientists who study animals just what the evolutionary function of seemingly frivolous play might be:

In a world continuously presenting unique challenges and ambiguity, play prepares these bears [and by extension, humans] for an evolving planet.

That is, we need flexibility and imagination to thrive; play teaches us to surmount the unexpected. Brown is convinced our need for this stimulus never stops:

I like that. I don't mean I want to some rigid program that requires me to "play" for my own good -- but I sure want to keep a spirit of experimental delight alive in my life, always.
***
This seems related to me: James Fallows has published an Atlantic Magazine article that bemoans his observation that contemporary Japanese life has lost the ambitious urgency that he experienced in the 1980s. People are richer; but they are no longer urgently striving for more, personally or nationally.

The elbows-out cockiness of the Japan I remember caused its frictions. But I miss its eagerness for a new version of itself.

A Japanese reader came back at him, arguing that the present more comfortable country had perhaps chosen a better path.

For us, the last twenty years (the two "lost" decades) are simply the normal state of affairs, and it seems silly to expect an economy to keep charging at full-speed forever. We have known from the beginning that an overenthusiastic pursuit of wealth can have devastating consequences. Why not forget about being number one and just enjoy what you have?

... I think that in the past twenty years, Japan has undergone a profound change in its perception of its place in the world. Japan is now confident enough, and mature enough, to just relax. In my admittedly biased opinion, I think this laid-back version of Japan is much more to my taste than the go-go days of the 80's.

This writer says nothing about economic inequality in Japan, a real problem not likely to be addressed by complacency.

But could it be that a rich nation could learn to enjoy what it has -- perhaps to make time for play? Obviously this doesn't work if your aspiration is to be top empire. But if your aspiration is simply to live, it seems more than adequate, in fact the essence of thriving.
Posted by janinsanfran at 3:00 AM