An economics designed for class war on most of us 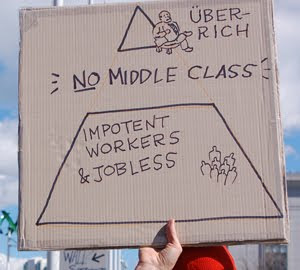 Some self-satisfied twit of an economics professor thinks he understands why old people (65-74) have maintained their share of the employment pie better than younger workers. He celebrates how efficiently market forces have made old people "increasingly willing to work." This leads him to question the social utility of tax credits and unemployment benefits that reduce the human impact of the recession.

It's pretty obvious that the dude is A) young and B) has never worked for a living at anything more arduous than creating equations and boring aspiring academics with Powerpoint presentations.

Here's a reality check: most people are out of the workforce by age 65. Here's the picture:

About 15.5 percent of Americans age 65 and older were still working in 2008, according to recently released data from the Census Bureau’s American Community Survey. Most of those [working] seniors (62 percent) have cut back to part-time work. But over a third (38 percent) [of those still working] continue to work 35 hours a week or more during the traditional retirement years.

My emphasis. Folks who are still working at 65 are NOT the norm in their age group. Only a tiny slice of old people are in the job market at all.

So who are this small set of old workers? Our twit points to one set: the desperate.

Many elderly people, for example, saw the market values of their homes and retirement assets plummet in 2008 and feel they can no longer afford to be retired. Naturally, many of them react by looking for work.

How lucky for his beloved (personified) "market" and for employers who can find takers for jobs with short hours, lousy pay, and abusive conditions now that expectations of financial security for ordinary people have collapsed. Those "most interested in working" (according to the twit) turn out to be also people who are most willing to bust butt and lick ass to keep any job, no matter how brutally painful, exploitative or demeaning.

I'll resort an anecdote to describe another kind of old worker. A friend's mother just died in her mid-seventies. Until last year, she'd worked nearly every day of her life including decades for the postal service. For the last few years, she'd had escalating health problems. But she kept delaying retirement. Why? Because she simply had no concept of herself as doing anything except reporting for work each day. Retirement never came; disability finally triumphed, followed by a quick death. The outcome reflected her choices, not market forces. Each of us has to ask ourselves whether a society that teaches old women and men -- teaches all of us -- that we are nothing if we are not working for money is a good one.

The other sort of old worker who carries on well beyond conventional retirement age is the sort whose job is also their creative outlet: think artists, politicians, administrators, judges, college professors ... That is, the kind of people whose employment never causes them to break a sweat and usually offers the chance to feel autonomous, in charge of themselves. Of course these people like to work: it boosts their self-esteem and feeds their souls.

Our twit seems not to have noticed how rare the last class is, presumably because he is comfortably confident he'll be around to join it someday.

Economic writing like this is enough to create sympathy for old-fashioned Bolshevism or Maoism. Profs who propound this twaddle need a stint of forced rehabilitative labor, perhaps a fifteen year sentence to flipping burgers, hand addressing begging letters for charities, or at casual construction or agricultural labor. After that, they might know something.

Photo is of a sign at a demonstration in support of Wisconsin state workers' right to unionize.
Posted by janinsanfran at 5:00 AM

I love the Maoist reeducation camp suggestion for stupid academics from a certain class. Well, not really, but for a moment there, yes.