Is the internet changing your brain? 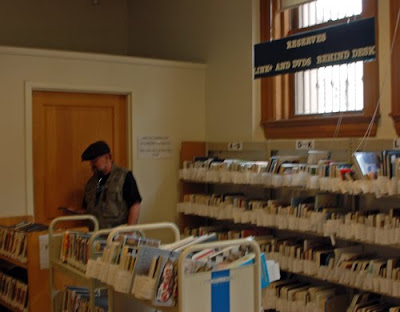 The shelves are multiplying in the lobby at my branch library. First there was a small bookcase in one corner. Then the shelves were extended along the wall. Now, rolling carts have occupied much of the floor space.

Why? Because the way many of us use the library has changed. Instead of consulting a catalog at the branch, whether in wooden drawers or at a computer, we select our books from the online catalog at home and put in an automated request. If the book is anywhere in the library system, they get it and deliver it to the local branch. The person making a request gets an email and the book goes on the lobby shelves awaiting pickup. You have 10 days to go get it.

"We can barely find enough space for all the requests," says the librarian at the desk

Aside from young people studying after school and homeless/poor people using the computers, the great hall where the permanent collection lives is no longer the central focus of the building. I haven't been up there in years. I haven't browsed the stacks in years.

Does this new way of "doing library" change my interaction with books? I don't know; I do know I like the convenience.
***
Dr. Betsy Sparrow of Columbia University says that the internet is changing how we use our capacity to remember things. Google has won. We count on it and adjust how we interact with information accordingly.

Sparrow devised experiments to test whether the expectation of internet access changed what we remembered. It did.

A second experiment was aimed at determining whether computer accessibility affects precisely what we remember. “If asked the question whether there are any countries with only one color in their flag, for example,” the researchers wrote, “do we think about flags — or immediately think to go online to find out?”

In [another] case, participants were asked to remember both the trivia statement itself and which of five computer folders it was saved in. The researchers were surprised to find that people seemed better able to recall the folder.

“That kind of blew my mind,” Dr. Sparrow said in an interview.

...“Human memory,” she said, “is adapting to new communications technology.”

I have no doubt she's right. Is this a good thing or a bad thing? Obviously many of us would be in deep doo-doo if we tried to perform some data-intensive task without internet access. But does this adaptation change or impair our experience of things that require something other than the internet -- such as trail running or listening to a familiar piece of music? The Tubes may make these pleasure easier to access (through route-finding or downloading), but the pleasure still resides elsewhere. The same goes for pains -- suppose I sprain my ankle on that trail. I still need to stagger home and in time do my physical therapy exercises, even if I can look up the condition online.

There are still physical limits to the alterations our technology can lead us into -- but for how long? I do wonder.
Posted by janinsanfran at 5:00 AM

Read this post earlier today moments before leaving. Came back to consider it again.

These are important ideas that all of us need to be exchanging about. No surprise that you would be reflective about this medium. Thanks.