On the eve of the Iowa caucuses ...

I did something very odd. I decided I should actually watch the unfiltered entirety of one of the Donald's Iowa stump speeches. I didn't doubt that clips and punditry had accurately communicated the famous boor's act, but I thought I'd see for myself. I randomly chose this one, an appearance at the University of Iowa. 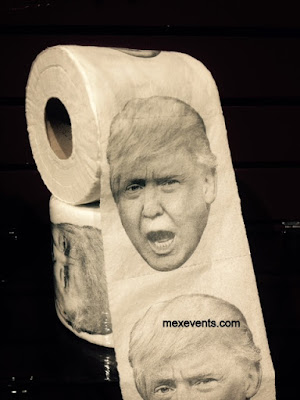 Mysteriously, the first thing I learned was that, though the video is 1:30 minutes long, nothing happens, literally, for the first 54 minutes. Apparently someone set up the camera and set it running that early. And apparently the crowd just milled around passively for those 54 minutes. Weird.

Yes, the Donald was the hateful, misogynist racist clown I'd been led to expect. And his audience lapped it up. Some portion of our fellow citizenry like communing with this clod in his pig sty. (Or is that an insult to pigs?) He is also an effective performer, possessed of much sharper timing and delivery than most politicians -- and I've heard lots of them.

The one bit of content I hadn't heard before was that it was his wife's urging that got him into this campaign. Really? Well, from her point of view, that probably beats having him around. I found just plain bizarre his bit about it being somehow Hillary Clinton's fault that Bill couldn't keep his dick in his pants. What fraction of us believe that sort of thing? Mostly just some fraction of older men, I suspect.

And he's a bald faced liar. No surprise there. He trotted about 10 members of the University of Iowa's Rose Bowl football team across the stage, proclaiming the team endorsed him. It will come as no surprise that that they were entirely white, unlike this team picture. 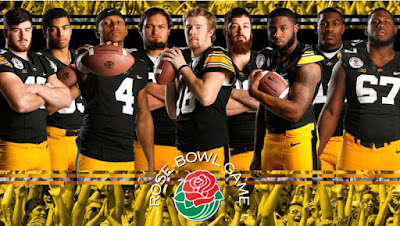 ***
Yet another Trump oddity, this one from the English-language liberal Israeli newspaper Haaretz:

A President Trump Could Be Netanyahu's Worst Nightmare
Because hell hath no fury like a Donald scorned and because his election could dismantle the pro-Israel bloc in Congress.

Hadn't thought about that. Long before he dismantled the pro-Israel bloc, he'd have dismantled this country's self-respect.
Posted by janinsanfran at 5:00 AM

I see a competitive race among Trump, Cruz, and Rubio, with most of the other candidates dropping out this month. t wasn't Paul's time.