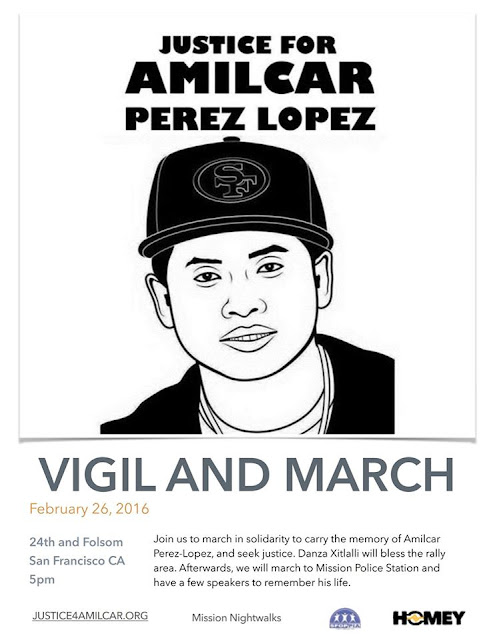 This coming Friday, we'll be remembering that one year ago, the SFPD fired #6shots2theback of Amilcar Perez Lopez, a Guatemalan construction laborer who may never have even understood that the men with guns chasing him were "law enforcement." All are invited.
***
Today Erudite Partner's latest article for TomDispatch is bouncing around the internet. In this piece, she aims to dispel any misconception that this Left Coast city has its police force under control. Mario Woods, Alex Nieto, and Amilcar are dead because too many San Francisco cops shoot first and inquire later. One racist detail from that article:

In 2015, a series of text messages involving at least 10 different SFPD members came to light during a corruption case against one of them, Ian Fruminger. Sent between 2010 and 2012, these messages revealed just how ugly the attitudes of that hard core are -- and how entitled they seem to feel to end the lives of people they believe deserve it.

Here’s a sample: Fruminger texted a friend who was an SFPD officer, "I hate to tell you this but my wife [sic] friend is over with their kids and her husband is black! If [sic] is an Attorney but should I be worried?"

He wrote back: "Get ur pocket gun. Keep it available in case the monkey returns to his roots. Its [sic] not against the law to put an animal down."

When the city moved to fire the officers involved, a judge ruled that the police department had missed a legal deadline for disciplinary action.

Read it all to take in San Francisco's shame.
***
Among the ongoing obstacles to holding police officers accountable to the citizens they are expected to protect and serve are privacy protections more far reaching than any normal employee can imagine enjoying. Records of police misconduct complaints and use of force incidents are treated as top secret, confidential matters which are routinely withheld by cities under a 1978 law and subsequent court decisions. Cops are allowed to carry and fire guns, but the citizens who hire them are barred from knowing even their names on many occasions. This is simply wrong. If police are to be allowed to use lethal force, they must be more, not less, accountable to the public than a garbage collector or city hall bureaucrat. They kill people!

State Senator Mark Leno has reintroduced a bill in the state legislature to open up police records.

Under the Increasing Law Enforcement Transparency bill, the public would be allowed access to records of serious instances of use of force — those that cause death or serious bodily injury — and records of sustained charges of misconduct, including sexual assault, racial profiling, job dishonesty, violation of rights and illegal search or seizure. That means officials have completed an investigation and found the officer in violation.

Those who file complaints would be able to obtain more information on the investigation, the findings and any discipline imposed, rather than a current cursory response that informs the person if charges were “sustained” or “unsustained.”

In cities, including San Francisco, the bill would also allow local officials to decide whether to restore public hearings and public appeals on allegations of misconduct.

When local officials can decide, we can sometimes browbeat them into doing their jobs ...
Posted by janinsanfran at 5:00 AM