Last Saturday night, San Francisco celebrated the Year of the Monkey with the Chinese New Year's Parade, one of our great annual civic festivals. 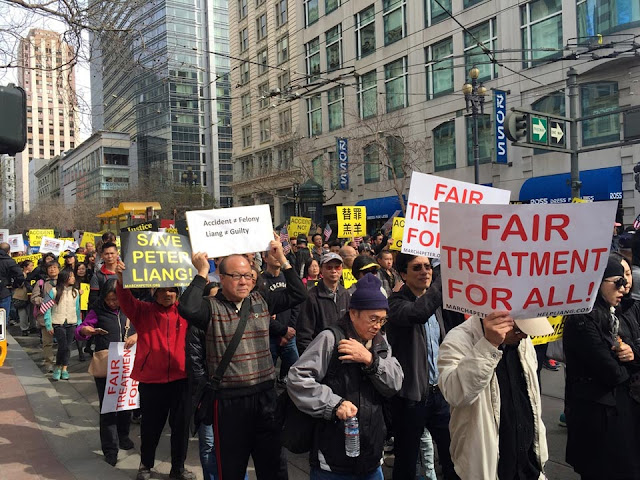 On Saturday afternoon, San Francisco hosted this parade down Market Street, estimated by police to number several thousand persons. Photo via Hoodline, a neighborhood news aggregator. Marchers were protesting the manslaughter conviction of New York City police officer Peter Liang for the shooting of Akai Gurley, a Black 28 year old walking down the stairs in a housing project. The rookie cop accidentally fired down a dark stairwell; a ricocheting bullet pierced Gurley's heart. Testimony that after the shooting Liang seemed more interested in saving his own career than in trying to save the dying man probably weighed against him with a Brooklyn jury.

As soon as I heard of this shooting, I thought to myself "Damn -- I bet they go after the Chinese cop." And "they" did. A "justice system" that couldn't indict the officer who was videotaped squeezing the life out of Eric Garner did manage to convict Liang. It's not surprising that many in the Chinese community can easily imagine that bigotry was involved; the discrepancy between what usually happens to cops who kill and Officer Liang's fate seems glaring.

Yet Asian American organizations which have decades of experience struggling for more justice from the police have advanced an opposing view. The Asian Pacific Labor Alliance responded to the verdict:

APALA continues to demand Justice for Akai Gurley and stands with his family who still have to deal with the reality of losing a loved one too soon at the hands of police. No matter the identity of an officer, we believe we must hold all cops accountable for their actions, especially when innocent lives are lost. ...

Members of our community are not immune from police brutality. Examples include Cao Bich Tran, who was shot and killed by a San Jose police officer, Fong Lee, who was killed by a police officer in North Minneapolis, and Sureshbhai Patel, who was left nearly paralyzed after being brutally beaten by an Alabama police officer. In these cases, AAPIs demanded the officers involved be held accountable - no matter their race or other identities. ...

CAAAV (founded 30 years ago as the Committee Against Anti-Asian Violence) wrote of the Gurley shooting:

We put out this statement to be clear: that the murder of Akai Gurley is a part of the systemic targeting of Black people by the police, and that Officer Liang must be indicted. As a police officer, he is a part of the institutional injustice we see everyday with law enforcement. We demand an indictment of Officer Liang, just as we have with Darren Wilson and Dan Pantaleo.

To be clear, the problem is not just individual police officers; the problem is systemic. The NYPD’s vertical patrols of public housing have led to unwarranted harassment of the residents and guests of those buildings, as part of the NYPD’s stop-and-frisk policy. When the police abuse their power, kill, and aren’t held accountable for their actions, officers are affirmed that they can kill with impunity. When, as a society, we are taught to equate “Black” with “criminal” and there is no overhaul of the so-called criminal justice system, then police officers and other armed vigilantes will continue to kill unarmed Black people every 28 hours.

On DailyKos, a report on a study of police killings concluded that simply increasing the number of officers of color isn't going to be enough to stop police shootings. Law enforcement will still be most active and visible in poor, usually non-white, communities where cops are socialized to see themselves as keeping underlying "thuggish" violence under wraps. With this mindset, regardless of individual ethnicity and even good intentions, they will believe they are licensed to kill if threatened. The struggle to make police departments subject to the law they claim to represent will be long and must be won if "justice" is to have any meaning.
Posted by janinsanfran at 5:00 AM