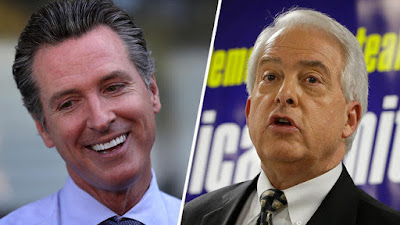 The Public Policy Institute of California (PPIC) is trying to make the governor's race between Lt. Gov. Gavin Newsom and business man John Cox interesting. Good luck with that. Given the disrepute of the Republicans here on the Left Coast, the relevant question is probably whether the GOPer can break 40 percent. I'd guess it will be a close call.

According to the Secretary of State:

Democrats now make up 44.4 percent of California’s 19 million registered voters, with no-party-preference voters at 25.5 percent and Republicans at 25.1 percent.

Most of those "no-party-preference voters" are young, city dwellers, and often from the communities of color. If they vote -- and Republicans keep giving them reasons to turn out in defense of their communities and their futures -- they lean Democratic, however reluctantly.

PPIC polling meanwhile finds a 10 point gap among likely voters, favoring leadership that pushes back against the Trump administration. No wonder Gavin is running as Mr. Resistance. I don't trust my former mayor's leadership, but he'll make the right noises. That we must have. 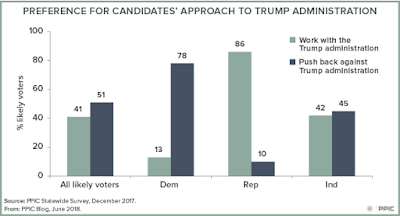 Though PPIC finds that overall we want push back, in their poll independents are more evenly divided. I wonder if that will hold up through further rounds of child-snatching?

A wrinkle in 2018 is that California is in the midst of a transition to all-mail elections, in which every registered voter will be mailed a ballot and the number of polling places and drop-off points for election day voting are cut back. Five counties tried this in the June primary:

Compared to 2014, Napa, Nevada and Sacramento counties had a 10 to 12 percent increase in voter turnout this year. Two were outliers: Madera’s turnout increased 8 percent, and San Mateo’s shot up 17 percent.

Let’s put that into perspective. Voter turnout in the 2014 primary was dismally low, so it didn’t take much to outdo that year’s turnout with 37.6 percent of registered voters casting ballots. ...

... San Mateo was one of a few counties that tested out parts of the new model, mailing ballots to every registered voter during a local election in 2015. As a result, last month’s primary voters and the city knew what to expect.

I worked briefly on that 2015 election and I think this conclusion is exactly right. Voters had to learn anew how to vote -- and then many rejoiced to get the task done in their homes in advance. Other counties, except Los Angeles, can opt-in to the universal mail-in ballot system in coming elections. This procedural change comes on top of the existing no-excuse "absentee for all" option which meant that 11.5 million ballots were mailed to primary voters across the state. Election Day as the focus of voting is receding.
Posted by janinsanfran at 5:00 AM

Seems to me the use of all mail-in ballots opens door for abuse and voting by others than the legitimate voter, so no wonder an increase in bogging numbers. I certainly don’t support so-called screening systems designed to restrict voting some states trying to adopt.