California is different. Why? 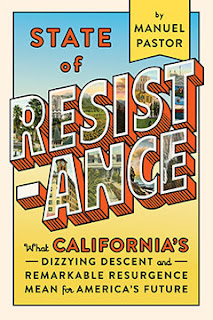 I've been slow to write about State of Resistance: What California’s Dizzying Descent and Remarkable Resurgence Mean for America’s Future because its subject matter is almost too close to me. One of sociologist Manual Pastor's key assertions describes my life, my professional career, if a succession of electoral campaigns, written insights, and organizing efforts can be called a career. (A strategy memo I wrote is quoted in this and Pastor relies heavily on Dan Hosang's Racial Propositions to which I contributed much material.)

Pastor describes California's climb out of a broken political framework built on white fragility and tax revolt. He contends the story cannot be written without emphasizing that something was brewing beyond establishment institutions.

Demography played a role -- a higher share of people of color helped tilt the state left ... The economy played a role as well ... Shifts in the political rules of the game have been essential ...

... organizers did not assume that demography itself would bring change; movement builders were intentional about amplifying the voice of the new majority. The state has become a hotbed of movements for decent wages, immigrant rights, racial equity and environmental justice. ... the state's ability to achieve fiscal balance with new taxes on the wealthy was actually an idea prompted by the movement activists who dragged the political establishment left ...

Omitting movements from the picture -- and focusing just on a septuagenarian governor or even the economic and political rules of the game -- will leave you with a story that is one step short. Policy change does not always start in the halls of the state or local legislatures, but rather in the streets, workplaces and voting booths where power is contested. ... understanding the strategic choices of California's organizers is critical to understanding the evolution of the state and can help others in the United States understand the need for and nature of grass roots work in an era of reaction.

Yes, indeed. And if that seems obscure, read this book. I'm not going to go into the movement aspect of this further here. Pastor provides a multitude of reasons to think that California is about two decades ahead of much of the country at constructing a better society and future. We face many challenges, but we've laboriously built at least some of the prerequisites for people-powered equity and sustainability.

Despite having lived so much of this intimately, there were elements of this story that I found novel and had to question. Pastor documents how the shift in California's wealth creation from agricultural and southern California to Silicon Valley and San Francisco was a boost to our progressive political culture.

Silicon Valley has long embedded an interesting internal contradiction: its competitive risk takers are frequently connected, partly through venture capital firms and partly because of mobility between business enterprises, and often see themselves in a sort of collective ecosystem that allows for individual success. ... [The "ecosystem" in various formations] sought to coalesce with other public and private actors to push for affordable housing, mass transit opportunities, green space, and other social and environmental infrastructure. One of the reasons for the unusual business support for extensive social serving infrastructure ... was the idea that these were factors key to the quality of life to attract and secure the loyalties of the high-skilled workers key to the new economy.

Well, maybe. Here in tech-impacted San Francisco, it's a little hard to applaud Silicon Valley's commitment to, say, affordable housing. But he's probably on to something in that, minimally, tech moguls inhabited a wider world than California agriculture barons or real estate/sprawl developers. And northern California plutocrats try to survive and thrive amidst a hornet's nest of community, environmental, and labor organizations which win their own impact on the culture of their environment.

As a statewide campaign organizer, one of the difficulties and oddities of state politics since the early 1990s has been that, although 60 percent or more of the people live in the south, nearly all major statewide elected officials -- governors, senators, even legislative leaders -- are from the north. Pastor does not directly address this. I always used to wonder: Los Angeles has the numbers -- why don't Angelenos just take over? The southland certainly has always had some of the most innovative community, worker, and union formations; Pastor describes them well. But the north goes on batting way above its weight. On this topic I find convincing some thoughts from a 2016 Mercury News article:

Bay Area voters are on the opposite end of the spectrum, said Mulholland, a Chico resident. “If you go door-to-door in San Jose or San Francisco or Oakland, whether it’s rent control or a legislative election, they’ll actually know something.”

...[San Francisco’s] compactness has helped foster a culture of grass-roots political engagement and networking that “much more closely resembles Boston or Chicago than Los Angeles or San Diego,” said Dan Schnur, director of the University of Southern California’s Unruh Institute of Politics.

One other side note on Pastor's description the California progressive ecosystem: he gives enlightened philanthropy big props for supporting our many para-political organizations. He's probably telling a kind of truth. But I can testify that through much of the 1990s and 2000s, winning any kind of foundation support for building voter engagement in poor communities of color was a miserable experience of confronting incomprehension and parsimony. (I'm retired. /snark)

One oddity of States of Resistance is that Prop. 54 (2003) appears nowhere in the narrative. That feels important, even though Prop. 54 was the ultimate outlier in the history of California's "racial propositions" -- initiative measures passed by a fearful majority white electorate that aimed to reduce the emerging clout of immigrants, African Americans, young people of color, and speakers of Spanish. It would have prevented the state from recording or collection information about racial outcomes of any governmental activity, pretty well guaranteeing institutional racism run amuck. And on this one, the emerging California majority won big, 64-36 percent. Weirdly, it was the only initiative on the ballot in the gubernatorial recall election that dumped Democrat Gray Davis and gifted us with Arnold Schwarzenegger.

Since Pastor doesn't tell you his opinion of why this wonderful out-of-pattern result was achieved on Prop. 54, I'll give you mine. (I worked against Prop. 54 in a non-leadership position.) This was the first statewide racial proposition on which grassroots, funders, and policy organizations showed they'd learned the lessons of all the brutal losses of the 1990s and formed a cooperative, sophisticated coalition that could work to deliver the most persuasive, poll tested messaging to the appropriate voters. Ten years of brutal failure began to pay off. Moreover, this was the first of the racialized initiative campaigns in which organized labor was willing to put some (still small) funding into community efforts to get out grassroots voters. This was a change from the decade of the 1990s when labor political directors seemed sometimes to snicker at the idea that community groups could reach people that unions could not. By 2003, we had all learned a lot. It's too bad that Pastor didn't include the Prop. 54 experience in his account of how a new progressive coalition laid the ground work for our present state of resistance.