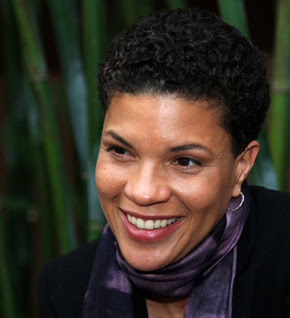 If you were a college student in a liberal arts curriculum in the early part of this decade, there's a good chance that your professors attempted to introduce you to the damage and durable horrors of white supremacy in the USofA by pointing to Michelle Alexander's The New Jim Crow: Mass Incarceration in the Age of Colorblindness. Others had struggled to raise consciousness about the Prison Industrial Complex for years, but Alexander's book reached a wide audience and amplified a rising movement. She toured frequently learning from grassroots justice activists, and in 2013 gave an interview to Bill Moyers which remains a timely exposition of the injustice of a system that locks up 25 percent of the worlds' prisoners, most of them Black and brown men.

Then in 2016, Alexander decided she needed to go on, stop practicing and teaching law, and embed herself in a more visionary context at Union Theological Seminary. She explained:

... there is something much greater at stake in justice work than we often acknowledge. Solving the crises we face isn’t simply a matter of having the right facts, graphs, policy analyses, or funding. And I no longer believe we can “win” justice simply by filing lawsuits, flexing our political muscles or boosting voter turnout. Yes, we absolutely must do that work, but none of it — not even working for some form of political revolution — will ever be enough on its own. Without a moral or spiritual awakening, we will remain forever trapped in political games fueled by fear, greed and the hunger for power. American history teaches how these games predictably play out within our borders: Time and again, race gets used as the Trump Card, a reliable means of dividing, controlling and misleading the players so a few can win the game.

I've long thought Alexander was onto a truth here; we must struggle against the forces that would eradicate human decency and even inconvenient human beings -- but we must do so in the context of a communal vision of where we want to go to. Around me, I see Black Lives Matter activists struggling for such a vision; I see Native American Water Protectors embodying their version of that vision; I see the #MeToo movement birthing a vision of a whole new relationship between the sexes.

And I'm delighted to see to see that as of Friday, the New York Times has given Alexander a megaphone as an oped columnist. She admonishes us to move beyond #Resistance.

Yes, of course, we can and must resist the horrors of the current administration — thousands of lives depend on us doing what we can to mitigate the harm to our fellow humans and the planet we share. But the mind-set of “the resistance” is slippery and dangerous. There’s a reason marchers in the black freedom struggle sang “We Shall Overcome” rather than chanting “We Shall Resist.” Their goal was to overcome a racial caste system — to end it — and to create a new nation, a Beloved Community. Similarly, those who opposed slavery didn’t view themselves as resisters; they were abolitionists.

Today, many of us in the movements to end mass deportation and mass incarceration do not want to simply resist those systems. We aim to end them and reimagine the meaning of justice in America. By the same token, many of those who are battling climate change and building movements for economic justice understand that merely tinkering with our political and economic systems will not end poverty or avert climate disaster, nor will mere resistance to the status quo. As the saying goes, “What you resist persists.” Another world is possible, but we can’t achieve it through resistance alone.

Alexander is a voice we need. I'll watch for her columns.

Posted by janinsanfran at 6:30 AM