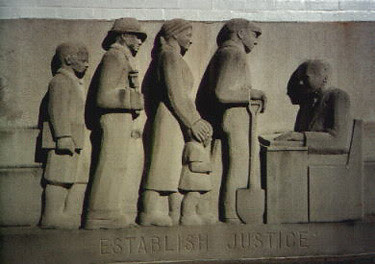 On Friday, April 22, my partner and I hauled ourselves down to federal court to watch arguments in our lawsuit, brought by the ACLU and cooperating attorneys, demanding that the Transportation Safety Administration and the FBI explain the "no fly list." In August, 2002, the two of us were told at the airport that we were on the "FBI no fly list," detained by San Francisco police, and subjected to special search procedures. We've sporadically had various kinds of special scrutiny at airports after this episode. Meanwhile, the lawsuit has been bumping along in the courts since April 2003. Several times the judge scolded the government for not turning over relevant documents.
Last fall the TSA released 300 pages, heavily blacked out, that showed that the administration of this list of persons thought to be a danger to aviation was haphazard and subjective. The ACLU went back to court, asking that the government provide legal justification for blacking out most information about the list -- blanket claims of national security aren't good enough to justify sticking labels on people

Friday's hearing didn't produce anything startling. Judge Charles Breyer seemed to be having attorneys for both sides appear so that he could ask them a few more questions.

He asked Tom Burke, our lawyer, whether we had flown since the initial incident -- Tom said yes, but the question gave him a chance to tell the court that the TSA is admitting that the list has now grown from 16 names in September 2001 to some 31,000 names now. Tom then pointed out that in March, his own name had turned up on the "terrorist watch list!"

The judge then asked the government to explain why they had blacked out the names of the mid-level bureaucrats who compile the list. He asked whether the government had considered whether "the public has the right to know who is doing the public's business." The TSA lawyer claimed "national security."

Later Burke suggested what government lawyers might be trying to hide:

Burke pointed to a February 2003 FBI e-mail first released last October. It read: "Criteria are confidential but involve things passengers might do which also might be things a terrorist would do, e.g., pray to Allah right before the flight that you might have 90 virgins in heaven."

Burke argued, even if the specific e-mail was only an insensitive joke, the public has the right to know who wrote the e-mail. Both the sender and recipient had been redacted.

Judge Breyer will be issuing his final opinion on what the government must disclose about the no fly list sometime in the next few months.

In view of right wing attacks on federal judges, it was interesting to spend a morning watching one work. Our case came up last on the mornings' docket, so we got to watch Breyer in action. He seemed quite devoted to discerning what law might apply in the cases before him and extremely knowledgeable about the facts of each case. In one case he admonished an attorney to give him a legal argument, insisting: "you can't just come in here and talk to me as if I were Judge Judy." On the other hand, in two cases plaintiffs were acting as their own attorneys (yikes!); he was very careful to make sure they really understood what motions they had to file and what procedures they had to follow. His patience was impressive.

One attorney attempted to plead his client's ignorance of one of the judge's earlier findings and consequent lack of a responsibility to comply. Breyer was stern: "you are bound by an order of this court -- that is the way it was last summer when I made the order; that was the rule when these matters happened; that is how it has been for 200 years."

I wouldn't want to try to make wingnut arguments in Judge Breyer's court -- and at the same time I am confident that in our case he will do his best to do justice to both plaintiffs and the government. Very impressive guy.

UPDATE [12/02/2005]: The lawsuit ended inconclusively. Judge Breyer made the government produce more and more documents that it didn't want to reveal, ascertained that we were able to fly normally, and finally ruled that it might endanger "national security" to require that they tell us completely why we turned up on their list. Other cases with other plaintiffs continue.
Posted by janinsanfran at 9:59 PM