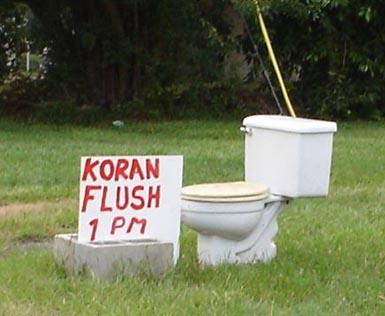 Every once in a long while, one hears a story that helps restore one's faith that reason and courage might sometimes prevail over ignorance and fear. This is such a story.

In Pinellas Park, Florida, Mike Allen decided to make a political statement, according to the St. Petersburg Times:

Abdeslam Rahmouni was horrified and offended at the sight of the toilet in the yard on 62nd Avenue. It was not the toilet per se. It was the sign in red letters on a white background: "Koran flush 1 p.m."
. . .
Allen's original thought was to use the toilet as a Memorial Day display. He would drop pictures of Osama bin Laden and pages from the Koran one by one into the toilet. The act, he said, was a way to honor those who died in the Sept. 11 terrorist attacks and in Iraq since the war began. It was also retribution, he said, for what Allen sees as a failure of Muslim clerics to object to the terrorism of Islamic extremists.
. . .
Allen's fight is not only with Islamic terrorists, it's also with Pinellas Park's code enforcement department, which cited him for having the toilet in his yard before the sign was put on it. . . .Allen, who received a $183 ticket for the toilet, said code enforcement has "tortured and harassed (me) even more than the people over in Gitmo" for speaking out once in a while.

Clearly this is once ornery, aggrieved bigoted nutcase.

Or maybe the situation is not so clear at all.

Council on American-Islamic Relations Central Florida Director Ahmed Bedier learned of complaints about the display. He went to the home to take a picture. When he noticed that the owner was home, he knocked on the door. And he talked with Mike Allen about his display.

Bedier happened to have his laptop computer with him. He showed Allen some of the Muslim condemnations of terrorism and CAIR's "Not in the Name of Islam" public service announcement. After about an hour of discussion, the homeowner offered to take down the toilet display. 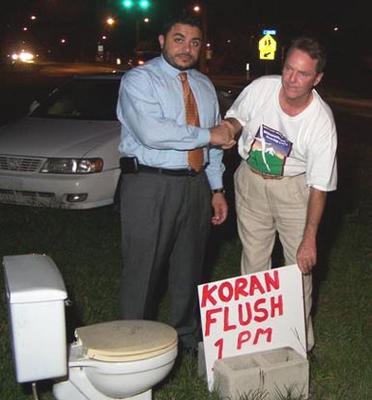 Posted by janinsanfran at 12:06 AM