End of benefit of the doubt 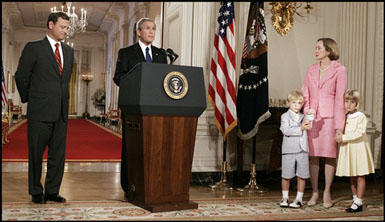 It has been hard for me to work up much energy for denouncing Judge John G. Roberts, President Bush's Supreme Court nominee. After all, I knew I was never going to like anyone Bush would be willing to nominate, so it is going to take finding something pretty awful to get me into a proper sweat over this guy.

Actually, I'm almost grateful that Bush didn't go the talking dog route, offering a fascist woman and/or person of color. There's no pleasure in observing the contortions of the viciously ambitious. Or maybe simply crazy.

But the picture above catches what immediately rankled about the guy -- he, and his family, look just like all the smug upper class twits I left behind by choosing to go to college at Berkeley in the sixties instead of one of the Seven Sister colleges.

It has been a long time since so much syrupy nostalgia has been in evidence at the White House. But Tuesday night, when President Bush announced his choice for the next associate justice of the Supreme Court, it was hard not to marvel at the 1950s-style tableau vivant that was John Roberts and his family.

Okay, so they flunk looking fashionable or even passably contemporary. Is that a crime? Certainly someone like me who once gleefully accepted the label "frumpy" can't go there.

But today, buried in the last paragraph of a New York Times roundup of Robert's judicial opinions, came this:

. . . he was impatient that same year with Thomas Penfield Jackson, a trial judge who ignored sentencing guidelines in determining that Darin M. Tucker deserved probation rather than imprisonment for possessing cocaine. Judge Jackson declared that he was "not going to be an instrument of injustice."

That was unacceptable, Judge Roberts wrote. "To the extent the district court based the departure on its belief that the sentence was unjust," he wrote, "it relied on a factor that is clearly impermissible under the guidelines."

If it is good law to enforce what is unjust, law loses any claim to morality; without a moral claim on society, law is simply superior force. This is a view that can only be held by someone smugly confident that he has the guns and will continue to wield them indefinitely -- a 1950s US upper class white boy perhaps?
Posted by janinsanfran at 8:53 AM

A man i really appreciate that article you wrote. My name is Darin Tucker and boy did i get the benefit of the doubt! I am very grateful for having done so as i have gone on to lead a very productive life as a computer technician in DC and haven't so much as jaywalked since being arrested in 2002. Well maybe jaywalked. Anyway, judges should be allowed to judge as judge Jackson did. For all cases are not alike and some people can be rehabilitated, i'm living proof of it.

this is Darin Tucker again, and to all who were praying on my downfall, you'll have to wait some more. and to those who have been praying for my success, its working!!! keep praying!!! its been over 7 years since i was initially arrested and almost 3 years since i last posted on this site. while that is not a long time, surely its long enough for me to have picked up and sold some more drugs, my occupation of 15 years. its not worth it. i have a 18 year old son who is on his way to college instead of jail quite possibly because of my decision to be there in person and not in jail. i've learned you affect everybody who loves you by the careless decisions you make. i'm still fixing computers for a living in dc. 3 beautiful kids and a beautiful granddaughter. life is good!