Death on the Fourth of July 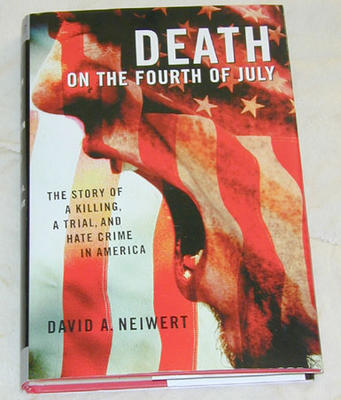 I just finished reading this study by David Neiwert, author of the invaluable blog Orcinus.

Death is really two books. One theme is an extremely well researched, exhaustively argued, explication of bias crimes legislation, the laws that enable courts to name and give enhanced sentences when they find that perpetrators were motivated by bigotry. Neiwert covers all the bases here. He describes the origin of the effort to criminalize bigotry with anti-lynching laws in the 1920s and 30s(we never got a federal law!) and continues up through modern right wing insistence that protecting gays from bias crimes would create "special rights."

If I were a neutral Martian I'd be really fascinated by all of this, but I'm not (either a neutral Martian or fascinated.) The creeps who don't want hate crimes laws haven't changed much since they were repressing uppity Negroes in the old South after the Civil War -- they enjoy being top dogs; they don't want to share; and they make up any intellectually specious nonsense (all pretty much cut from the same legal-rights-for-moral-white-folks cloth) that enables them to hang on to superior status.

I was much more interested in Neiwert's other narrative describing the sequence of events which left a Confederate flag waving white man dead and an Asian immigrant on trial for manslaughter in a small Washington state beach resort town. As a pretty visible dyke, I've known what it is to be afraid of the locals in slightly seedy vacation spots where bored local kids sometimes get their kicks by harassing the "wrong kind" of tourists. That kind of scene is trouble waiting to happen. What was unusual in this case was that, not only did someone end up dead, but, almost accidentally, it was the bully who was killed while his intended victim walked away (though certainly not unscathed.)

As is usually the case in this kind of crime, there was lots of warning. The same small crowd of unruly local white boys had harassed Filipinos and an African American earlier in the day before they ended up late at night, drinking heavily, outside the only store open in town. There they met three hapless Asians and picked a fight, not knowing that in fear for his life, one of the potential victims had picked up a couple of paring knives for self defense. Local police, totally untrained in dealing with hate crimes, charged the knife wielder, ignoring the racial harassment and threats; to their great credit, a local white jury hung 11-1 against convicting and charges were dropped.

Neiwert tells a good story, fairly, and with nuance. In the present political climate, it is unlikely that governments will fund training for small police departments to recognize and deal with bias crimes, as he suggests. But the book is a useful read as we confront a climate in which security fears will almost certainly encourage a range of hate crimes directed at perceived enemies, whether Muslim, or brown, or Black or queer.
Posted by janinsanfran at 10:09 PM

Email ThisBlogThis!Share to TwitterShare to FacebookShare to Pinterest
Labels: racism