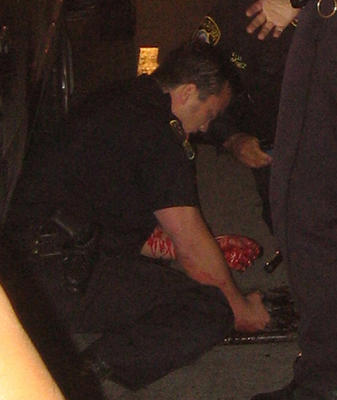 Photo by Liz Highleyman from SF Bay Area Indymedia
On Friday a tiny anarchist protest march passed by the street where I live several times and ended nearby with a cop bleeding from the head and 5 arrests, several of those on felony charges. The San Francisco Chronicle reported:

The San Francisco protest was billed as the "West Coast Anti-Capitalist Convergence and March against the G-8." Protesters broke windows and glass doors at two Wells Fargo Bank locations, a Kentucky Fried Chicken restaurant and a shoe store. Red anarchy signs were spray-painted on sidewalks and windows.

Police cordoned off the area where the injured officer had been swarmed and hit on the head by protesters after a mattress was thrown under his cop car. (This according to press accounts; I didn't see any of this part of the evenings' festivities.) We got to the police's yellow tape barricade not long after cops arrived in force to the call of "Officer down." and an ambulance pulled up. A few anarchists gathered across the street, stilled pumped up enough to yell some challenges at the cops, but the action was winding down.

My response to this, events that would be novel most places but were pretty commonplace in San Francisco, surprised me a little -- mostly the scene just made me feel tired. Am I turning into an old fogy?

Sure, a little. I'd noticed signs for the G-8 protest earlier in the day and thought, "no, I don't want any of that. Some bunch will need to prove their 'revolutionary' cred by breaking stuff and fighting cops. It will all mean nothing except to the protesters." And so it came to be, except that the legal charges are a lot heavier than usual and a police officer may have sustained a real, serious injury. I find it hard to imagine what busting up stuff in the San Francisco Mission District will do to impede the ravages of global capital. Almost certainly the protest will only mean that next time anarchists march, the SFPD will be out for their blood.

I've written on this blog about times in my life when rioting seemed a perfectly appropriate response to desecration. I still believe there are such times. But I believe little events like the other nights' demonstrate the decay of what once were viable tactics that have now become ritualized and counterproductive. Resistance to globalization showed its muscle in Seattle in 1999 -- and sadly, in an ever more atrophied form, activists have been trying to replicate that success of direction action ever since. But come on folks: Seattle had a politically understandable target, the WTO meetings; months of painstaking education and preparation brought the opposition to the actions better organized than the forces of the state; and thousands of activists were ready to take to the streets. It was a great model, but nothing, including the recent Edinburgh protests, has come close to equaling it. For one thing, the police have evolved better tactics that do not win demonstrators public sympathy.

Massed, anarchist flavored, direct action tactics are not unique in becoming stale models of protest. During the 1980s, mass non-violent blockades of nuclear facilities devolved into highly choreographed, pre-negotiated "non-violent" charades in which protesters assumed little risk and the police negated the moral force of the protest. In the mid-1960s, student strikes at US universities were unheard of, attention-demanding anomalies; by the end of the decade they were old news and lost their power.

What is likely to work in the future? I'm not imaginative enough to know, but I can throw down some simple thoughts that might help:

Posted by janinsanfran at 10:13 PM