To shoot or not to shoot

A photographer who works for the newspaper the Arizona Republic was, in his words, "Rattled." Patrick Breen (@pjbreenphoto) explains:

Was just accosted while taking photos at a baseball tournament in Mesa. Parents yelled for me to not take pictures of their kid. I agreed and asked which kid was theirs. They didn’t want to say and said if I did they would “kick my ass.”

They yelled I was the fake news, I was taking pictures of little boys and that I was a pedophile. ... I’m shaking. More because I just want people to understand that I’m not their enemy. I love my community. I love telling their story through pictures. Leaving defeated. I didn’t want them to think they shouted me away but more aggressive parents were eyeing me.

So here I am in the parking lot at a public park in Mesa feeling ashamed for doing one of my favorite things in the world- taking pictures. If we all were just a little kinder.

Political passion hijacked by conspiracies is having a sad effect in that Arizona suburb.

As people who read here know, I am working on another project, Walking San Francisco, which takes me through every corner of this city -- with camera.

And consequently, I'm extremely conscious that San Franciscans out and about have a range of reactions to becoming aware that photos are happening -- some hostile, some indifferent, some curious, some delighted.

I make it a rule not to photograph children except at extreme distance -- I might take shots at a soccer practice, for example, but only from well off the field. The adults with them can get weird.

I am ready with cards pointing to the project URL for anyone who engages me. I try to always be ready to stop and talk with anyone, friendly or hostile, who wants to know what I'm doing.

This gregarious gent buzzed by me on a residential sidewalk the other day, spun around, and demanded: "take my picture!" So I did. 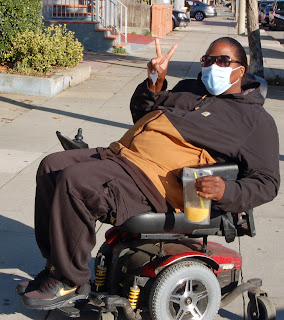 A little conversation confirmed my impression: he takes care of his 'hood. In his way. Love this city!

Posted by janinsanfran at 9:22 AM