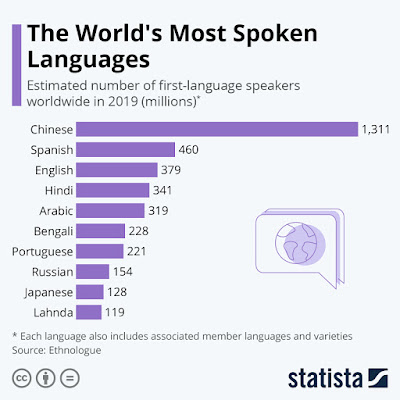 A leisurely morning reading the news (scary as usual) led me to this. It contains a lot to ponder.

Like what's Lahnda and who speaks it? Fortunately, Wikipedia provides: "Lahnda, also known as Lahndi or Western Punjabi, is a group of north-western Indo-Aryan language varieties spoken in parts of Pakistan and India." So three South Asian-continent languages are among the top 10 numbers of first language speakers -- aggregating to 688.

It's always surprising to look around the world and see how very many people speak English at home. The former British empire was a hell of thing -- as has been the U.S. version. Many linguists predict that the future evolution of English will emerge from the South Asian region.

English and Spanish, which use simple alphabets, outperform symbol-based languages like Chinese and Japanese on computers -- an advantage that might be eroded by greater computing power. But there's no question that today English remains the language of global commerce.

Maybe if more of us were habitually fluent in more than one language, this all might shake out differently.

These meandering reflections came about because I chased down the website of a Sacramento teacher and Ed Week columnist, Larry Ferlazzo, who has published a really interesting opinion piece about teaching K-12 in the coming semi-post-pandemic year. Highly recommended.

Posted by janinsanfran at 11:47 AM