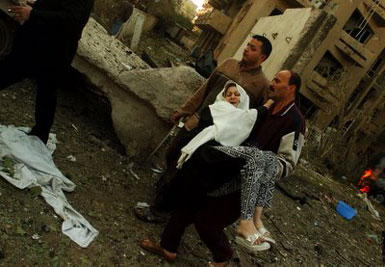 Outside Baghdad's al Hamra hotel, after Thursday's suicide bombing. Photo by Bill Putnam who lives there.

So yesterday, the Republicans in Congress treated that institution as a sandbox, suitable for a kindergarten brawl over the right of opponents to question Prez. Nincompoop's war. Democrats demonstrated, more than in a long time, enough fight to show the Reps up for the mean, whining incompetents that they are.

All very cute. But meanwhile, Iraqis and our unfortunate cannon fodder keep dying.

Riverbend speculates from Baghdad about why world media act so surprised about the recently uncovered "torture houses."

The Americans know they exist- why the sudden shock and outrage? This is hardly news for Americans in the Green Zone. The timing is quite interesting- it shouldn't matter that this raid came immediately after the whole white phosphorous story came out, but the Pentagon and American military have proven to be the ultimate masters of diversion.

Only last year in an area called Ghazaliya, one such house was discovered. It was on a smaller scale though. My cousin lives in Ghazaliya and he said that when the Americans got inside, they found several corpses and a man hanging from the ceiling on a makeshift noose. The neighbors had tried to get the Americans to check the house for months- no one bothered. They finally raided it because they got information from someone in the area that it was an insurgents hiding place.

I read once that in New York, if a woman is being raped, she should scream 'fire' instead of 'rape' because no one would come to save her if she was screaming 'rape'. That's the way it is with Iraqi torture houses- the only way they'll check it is if you tell them it's a terrorist cell.

All this is very reminiscent of the 1980s when the US conducted "secret wars" in Central America -- wars that were certainly not "secret" to the unfortunate Nicaraguan and Salvadoran peasants who found themselves on the wrong end of them -- wars hidden only from inattentive US residents.

The forces fighting the US in Iraq are doing their best to remind the US that there is a war on; last week they got the journalists' attention by attacking the al-Hamra Hotel where many live. Chris Albritton of Back to Iraq and Time magazine is on R&R in Beirut, but he links to his friends' articles about what it is like to be the target of a suicide bomber. Catherine Philip describes "the moment when a suicide bomb is suddenly aimed at you" in the Sunday London Times.

I pulled on the first clothes I could find, picked up a bag with all my personal documents in it, and ran for the door. … I ran down the remaining nine flights of stairs to the ground floor. Shattered glass and smears of blood covered the reception floor.

Dazed staff wandered around searching for one another. Outside, the courtyard was strewn with the charred gobbets of flesh, the unmistakeable sign of a suicide bombing that I had seen on Baghdad’s streets so many times before.

At the end of the road, a woman in a black abaya was screaming, searching for her missing husband. Two men rushed out of a neighbouring apartment block whose side had been ripped off. They were carrying a child still dressed in her pink pyjamas, bloodied and weeping. It was the little girl who used to wave at me from her balcony. …

It was the sheer scale of the insurgents’ ambition that saved our lives. The crater and pile of debris created by the first explosion was so huge that the second lorry could not get through. It detonated where it was, killing at least eight of those living in the surrounding flats. Miraculously, not a single journalist was killed. …

I looked at the bomber’s foot still lying on the ground. No, I thought to myself. If I believed in Hell, I’d hope that you were there now.

Well, the bombers certainly got the reporters' attention. It is hard to imagine that journalists will continue to try to report from these conditions. Who is served by a hidden war? The guys with the guns, on every side? Not really even them. Meanwhile, meaningless killing goes on for everyone else.

Journalists have started a collection for the families of Iraqis who had the misfortune to live next to the Al Hamra, according to Albritton.
Posted by janinsanfran at 10:39 AM

Hi,
I ran across my photo on here. I'm wondering how did you get it? Can you email me? Thanks.
Cheers,
Bill.

Bill - I attempted to email you at putnasr@yahoo.com per your blogger profile, but it bounced.