The U.S. government talks about torture: a glossary 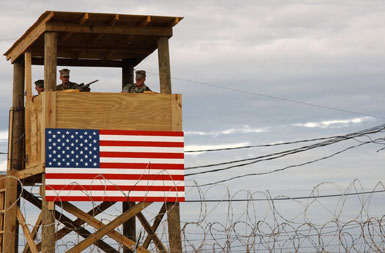 This was simply too well done not to spread: the Institute for Southern Studies writes: We usually reserve the "Institute Index" for cold, hard statistics. But recognizing the confusion felt by many after the administration rebuffed a 90-9 Senate vote to condemn torture, in this issue we share the "Facing South Torture Glossary and Translation Dictionary (TM).

Unlawful combatants: Prisoners in the War On Terror defined by the Bush administration as not subject to the Geneva Conventions or any other form of law or criminal justice

"We do not torture": What the Bush administration says when they mean they order low-ranking soldiers to torture with the assistance of civilian "contractors"

Unpatriotic: Opposition to torture on the grounds that it is immoral, illegal, not generally believed to be effective, is not what America stands for, and puts future American POWs at higher risk of being tortured.

UPDATE: this morning the New York Times provides another prize locution: evidence against the unfortunate and undoubtedly unpleasant Jose Padilla was "obtained through harsh questioning." That means torture. The official glossary is apparently also used by the "newspaper of record."
Posted by janinsanfran at 4:23 AM