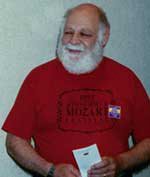 "On this day, the Church remembers all of the faithful departed who died peaceable deaths, … these were ordinary people…" according to the useful Episcopal liturgical website Mission St. Clare. I like the idea of remembering with delight the people who've been important to us. Today I remember a friend and mentor who left us in 2001 at the age of 66.

Tim Sampson was certainly not ordinary, in the sense of "unremarkable;" however he would never have thought of himself as anyone special, so in that sense, this does seem to be his day. As far as his being one of the "faithful," I really don't know what that means: I think of Tim as a Jewish-Quaker-Buddhist-anarcho-commie-Santa Claus, so I am sure he fits under that word somehow. In any case, his life was the art form of a man who found ways to live out what he believed in.

Tim lived for the struggle for justice and his notion of justice was wide and deep. His concerns bridged divides that often act as barriers between people who ought to be on the same side. I knew Tim best in that last role: periodically he would wander into the CFJ office with a briefcase full of flyers and petitions for various good causes. His arrival was usually literally like the arrival of Santa Claus. We never were sure how we were going to make the payroll in those days. Tim sold CFJ buttons everywhere he went. The $60 or $110 he brought us was an important addition to our pathetic stash!

Organizing to take political and economic power from the strong for the weak is hard, frustrating work that can leave its practitioners cynical and bitter. Tim never succumbed to those temptations. He was enthusiastic about each new campaign, thoughtful, hopeful and warm toward those he worked with. Forgoing the brash, macho posture many organizers of both sexes assume,Tim taught aspiring organizers that:"The flowers of organizational relations grow from personal interest, kindness, and cultivation."

For many organizers, building power for the weak is about harnessing anger and resentment against the powerful. And certainly where injustice and oppression are the rule, anger can be righteous and useful. But it can also be a corrosive addiction and Tim knew that.

When I started organizing, one of my primary motivations, which I came to cherish, was anger. But as my life went on, I learned there is a more powerful force in the struggle for social change, and that is love.

The older I get, the more I know he was right.

Email ThisBlogThis!Share to TwitterShare to FacebookShare to Pinterest
Labels: California, gone but not forgotten, history