The pilgrim journey of mainline Protestantism

Strength for the Journey: a Pilgrimage of Faith in Community
by Diana Butler Bass 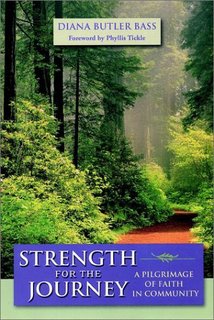 To Alan Wolfe's Transformation of American Religion, a dismissive picture of U.S. believers as self-seeking moral and intellectual light-weights, Diana Butler Bass offers a corrective view. Deeply serious and fully theologically engaged, she tells the story of her own growth along a spiritual path that led her from an evangelical "born again" Christianity to complex participation in what she contends is a revivified mainline Protestantism. Mainline Protestantism encompasses the traditional denominations such as Episcopal, Lutheran, Presbyterian, Baptist, etc., that are currently eclipsed by non-denominational, usually politically and socially conservative, megachurches.

Along the way Bass unflinchingly records her struggles with Biblical literalism, women's ordination, gay inclusion -- all the "issues" which have roiled the formerly establishment churches. For her, these issues are the epiphenomenon of these churches adapting to losing their cultural hegemony in U.S. society and making the transition to leadership from the baby boomer generation. The book is a social history of the mainline told through biography.

Such a book could easily take the form of scoring off the people Bass left behind on paths she didn't choose. It is greatly to her credit that she doesn’t go there, even when she describes a congregation that spit out clerical leadership she trusted but which most members were unwilling to follow. She tries to understand what moves believers in their struggles and to observe with sensitivity and respect.

And she emerges in 2000 from a twenty-year process of self and institutional discovery very hopeful about the future of her kind of Christianity, something she describes as taking place in "intentional congregations":

People come because the church lays out a theologically meaningful (but not dogmatic) vision in worship and Christian formation, giving them the ability to see their work, relationships and the world with spiritual insight.

Intentional congregations draw newcomers because of something transcendent, a connection with God embodied in the spiritual practices of a distinct tradition in the context of a particular community.

They are pilgrim congregations -- communities that practice faith in the world yet live at some tension with the surrounding culture….

Intentional congregations know who they are, can live into that identity, interpret it in culturally relevant theological language, engage in practices that engender commitment in their members and possess a sense of missionary obligation….

A new vitality is making its way across the old mainline landscape, and, for those with ears to hear, it is a time of Pentecost.

This encouraging book is worthwhile reading for anyone sickened by the identification of "Christian" with the intolerances of the Jerry Falwells and Pat Robertsons.
Posted by janinsanfran at 4:40 AM

Email ThisBlogThis!Share to TwitterShare to FacebookShare to Pinterest
Labels: religion