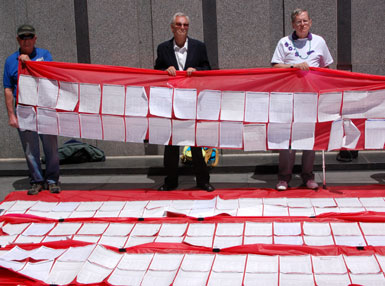 To show the large volume of petitions they had collected, protesters spread the individual sheets out on large red banners.

Today was the last day for current Medicare recipients to sign up without penalty; those failing to do so will be charged a late enrollment assessment for life! Once the sign up deadline is past, eligible people who didn't manage to figure it out will not be able to enroll until January 2007 and will pay what some are calling Bush's "prescription drug tax," a seven percent penalty. 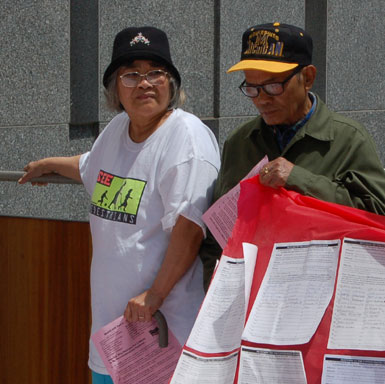 Many seniors have found the new "drug benefit," provided by a confusing array of private insurance companies, fails to cover their particular needs or, even worse, isn't honored by their pharmacies.

According to speakers at today's rally, the Republican-backed new law is designed to raise profits of insurance companies, not to ensure the well-being of older people who need drugs. It is full of bureaucratic hurdles, inflexible rules and coverage gaps that almost seemed intended to trip up "beneficiaries."

Pelosi knows when she has to get on the bus with her constituents. Her aides passed out a statement:

While the benefit works for pharmaceutical companies and big business HMOs, it isn't doing enough to make prescription drugs more affordable for our seniors. That's why Democrats are working to improve the flawed Republican prescription drug program -- and we want to do it today. 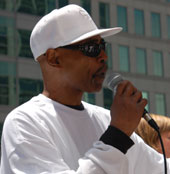 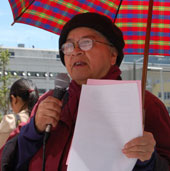 Bobby Bogan (left above), an organizer for Seniors Organizing Seniors, would go a lot farther than our Congresscritter. He announced: "if we have to, we'll sit in, walk in, roll our wheel chairs in and get this unfair law replaced." 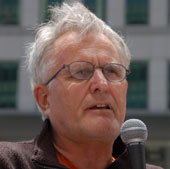 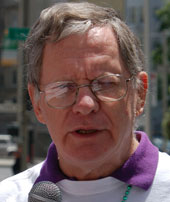 Don Beckler (left) of Health Care for All called the Medicare Part D program nothing but "snake oil from insurance companies" and called for universal, single-payer health care. Don Beetle (right) testified to what it is like living with a Medicare eligible roommate with HIV disease whose drugs simply aren't comprehensively, reliably covered under this program.

The small demonstration was also organized by the California Alliance of Retired Americans, Gray Panthers, and Senior Action Network.

According to the New York Times, chaotic federal implementation of the plan has forced many states to step in to pay charges their senior citizens cannot put out while waiting for the Feds to get organized.

In January, California, like many other states, set up an emergency program to help low-income people having difficulties filling prescriptions under the new Medicare law. Stan Rosenstein, the Medicaid director in California, said last week, "We are spending a half-million dollars a day on our program because a number of people are still having problems."

The California program is set to expire on Tuesday. The Legislature is working with Gov. Arnold Schwarzenegger to extend it, with some changes, through Jan. 31.

According to the San Francisco Chronicle, there are 43 million people on Medicare. Republicans expect 6 million to miss the deadline; Democrats think that figure will be more like 9 million.

Protesters don't really care what either set thinks: they want their government to do its job and ensure that older people get the benefits their wealthy country should be able to provide them.
Posted by janinsanfran at 6:08 PM

Appreciate your blog,mental health consumers are the least capable of self advocacy,my doctors made me take zyprexa for 4 years which was ineffective for my symptoms.I now have a victims support page against Eli Lilly for it's Zyprexa product causing my diabetes.--Daniel Haszard www.zyprexa-victims.com